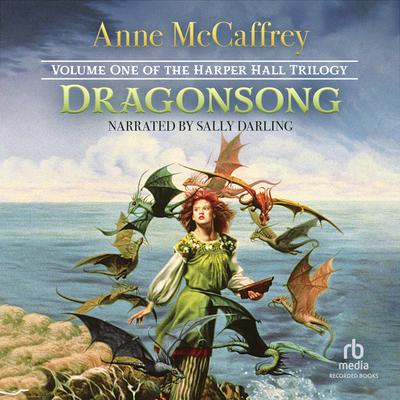 The Dragonriders of Pern Series: Book 4

Journey to the wonder-filled world of Pern in the first volume of Anne McCaffrey's best-selling Harper Hall Trilogy. Dragonsong is the spellbinding tale of Menolly of Half Circle Hold, a brave young girl who flees her seaside village and discovers the legendary fire lizards of Pern. All her life, Menolly has longed to learn the ancient secrets of the Harpers, the master musicians of Harper Hall. When her stern father denies her the chance to make her dream come true, Menolly runs away from home. Hiding in a cave by the sea, she finds nine magical fire lizards who join her on a breathtaking journey to Harper Hall. Anne McCaffrey's enchanting tales of Pern, with all their colorful dragons and fantastic characters, have won her millions of fans around the world. The winner of the Hugo and Nebula Award, she is one of the best-loved writers in all of fantasy literature.

Anne McCaffrey (1926–2011), one of the world’s most popular authors, was best known for her Dragonriders of Pern series. She was the first woman to win the two top prizes for science fiction writing, the Hugo and Nebula awards. She was inducted into the Science Fiction Hall of Fame, and was named a Science Fiction Writers of America Nebula Grand Master. Born in Cambridge, Massachusetts, in 1926, McCaffrey relocated to Ireland in the 1970s, where she lived in a house of her own design, named Dragonhold-Underhill.