There is nothing in the universe the cursed dragon, Falcyn, hates more than humanity . . . except Greek humans. In a war he wanted no part of, they systematically destroyed everything he’d ever cared for. Now he waits for the day when evolution will finally rid him of the human vermin.

Medea was born the granddaughter of the Greek god Apollo, and among the first of his people that he cursed to die. But she will not let anyone rule her life. Not even her notorious grandfather. And when Apollo sends a new plague to destroy what remains of her people, she refuses to stand by and watch him take everything she loves from her again.

This time, she knows of a secret weapon that can stop the ancient god and his army of demons. Once and for all. However, said device is in the hands of a dragon who wants nothing to do with politics, the gods, humanity, demons or Apollites. And especially not her. He is the immovable object.

She is the unstoppable force . . .

When Apollo makes a strategic move that backfires, he forces Falcyn back into play. Now Medea either has the weapon she needs to save her people, or she’s unleashed total Armageddon. If she can’t find some way to control the dragon before it’s too late, Falcyn will be an even worse plague on the world than the one Apollo has set loose. But how can anyone control a demonic dragon whose sole birthright is world annihilation?

“Narrator Holter Graham pulls listeners back into the paranormal world of the Dark Hunters…Graham does an excellent job of creating unique voices for each character. He gives Falcyn a rich accent that flows over listeners’ ears. Both Falcyn and Medea have suffered in the past, and Graham conveys this empathetically. His timing works especially well during the bantering among the characters. Overall, this is a highly enjoyable listening experience, especially for those familiar with the series. Winner of the AudioFile Earphones Award.” —AudioFile
“Dragons are again front and center in the latest novel from the prolific and excellent Kenyon. Curses and their horrific ramifications, which often fall on the innocent, have played a large role in much of Kenyon’s Dark Hunter series. Another fascinating theme in these stories is that sometimes evil is in the eye of the beholder. How these characters accept and face difficult choices help tell a thrilling and passionate story and also moves along the overarching series plot line. Kenyon is a one-of-a-kind storyteller!” —RT Book Reviews (4½ stars, Top Pick!) 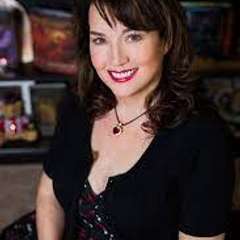