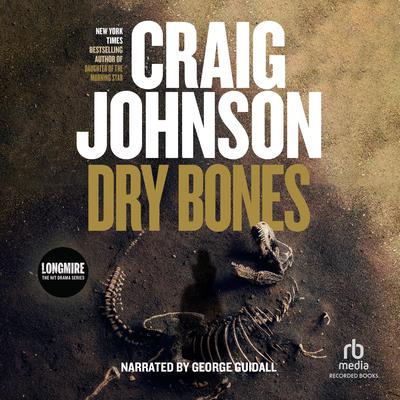 Finalist for the 2015 Spur Award for Best Western Contemporary Novel

In the latest installment of Craig Johnson's New York Times bestselling Longmire series, Wyoming's beloved lawman takes on his coldest case yet When Jen, the largest, most complete Tyrannosaurus rex skeleton ever found surfaces in Sherriff Walt Longmire's jurisdiction, it appears to be a windfall for the High Plains Dinosaur Museum-until Danny Lone Elk, the Cheyenne rancher on whose property the remains were discovered, turns up dead, floating face down in a turtle pond. With millions of dollars at stake, a number of groups step forward to claim her, including Danny's family, the tribe, and the federal government. As Wyoming's Acting Deputy Attorney and a cadre of FBI officers descend on the town, Walt is determined to find out who would benefit from Danny's death, enlisting old friends Lucian Connolly and Omar Rhoades, along with Dog and best friend Henry Standing Bear, to trawl the vast Lone Elk ranch looking for answers to a sixty-five million year old cold case that's heating up fast.

“Fast paced [and] entertaining…Johnson, as usual, offers colorful glimpses of Wyoming history and its physical features. Johnson is able to make the landscape itself at least as fascinating as the slightly off-kilter, and sometimes murderous, folks that inhabit Walt’s universe.” —Denver Post
“George Guidall just gets better and better as the gruff, dependable Sheriff…Guidall’s interpretation of Longmire and the denizens of Absaroka County conjures emotions ranging from anger to warmth and from jealousy to friendship. When Walt’s daughter and granddaughter visit and bittersweet conflicts arise, Guidall is so genuine he’s almost invisible. First-rate listening. Winner of the AudioFile Earphones Award.” —AudioFile
“[Longmire] never disappoints the reader: he’s a hero through thick and thin.” —Publishers Weekly
“[Walt Longmire] remains tough, smart, honest, and capable of entertaining fans with another difficult, dangerous case.” —Kirkus Reviews