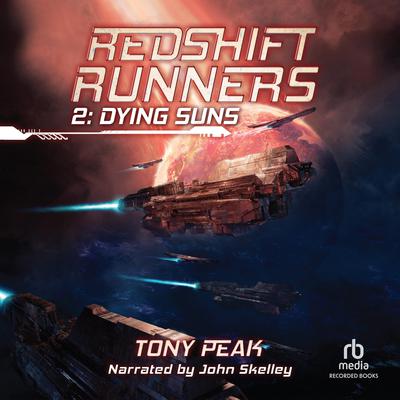 After deactivating Parallax and restoring access to Earth, Deadeye and the Redshift Runners have become the most infamous pirates in the Orion Spur.

Yet the old order has its hands full with Dying Suns, a political movement calling for a return to Earth—while leaving the barren, “dying” worlds they were forced to colonize. Miners, farmers, and other settlers petition the Runners to fly them to humanity’s birthplace.

This upsets corporations and nobles who profited from such exploitation, and Deadeye undertakes the deadliest missions he’s ever flown to save the frustrated masses. But Talon, his beloved captain, has her own vendetta against the nobles, and Deadeye must face his past—and hers—if they are to survive.

Tony Peak is a member of Science Fiction and Fantasy Writers of America and the Horror Writers Association. His work appears in eighteen different speculative fiction publications and anthologies.