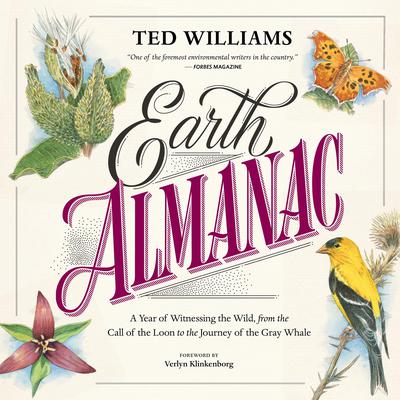 Earth Almanac: A Year of Witnessing the Wild, from the Call of the Loon to the Journey of the Gray Whale

By Ted Williams
Read by Will Damron

Noted nature writer Ted Williams invites readers along on a year-long immersion in the wild and fleeting moments of the natural world, from winter candy and spring quackers to summer’s scarlet farewell and autumn reveilles. This beautifully crafted collection of short, seasonal essays combines in-depth information with evocative descriptions of nature’s marvels and mysteries. Williams explains the weather conditions that bring out the brightest reds in autumn leaves, how hungry wolf spiders catch their prey, and why American goldfinches wait until late July or August to build their nests. In the tradition of Thoreau, Carson, and Leopold, Ted Williams’s writing stands as a testament to the delicate balance of nature’s resilience and fragility, and inspires readers to experience the natural world for themselves and to become advocates for protecting and preserving the amazing diversity and activity found there.

“One of the foremost environmental writers in the country.” —Forbes, praise for the author

Ted Williams (1918–2002) won the American League batting championship six times and was given a place in the Baseball Hall of Fame in 1966. He was the last man to bat .400 in major league baseball and has been considered America’s leading sports fisherman. With John Underwood, he coauthored 'Fishing The Big Three’ and his autobiography, My Turn at Bat, as well as Science of Hitting about the science of baseball.

Ted Williams writes full-time on fish and wildlife issues in a monthly “Recovery” column for the Nature Conservancy’s Cool Green Science and in various other publications. A longtime contributor to Audubon magazine, he was recognized by the Outdoor Writers Association of America as the nation’s best outdoor columnist and has received numerous other national writing and conservation awards. He serves as national chair of the Native Fish Coalition.