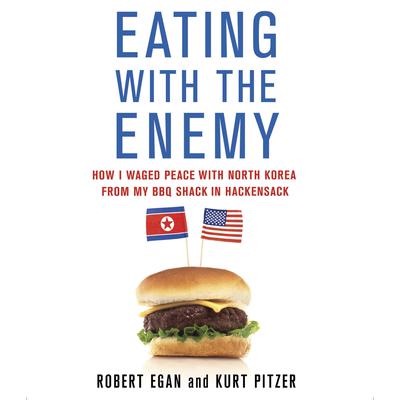 Eating with the Enemy: How I Waged Peace with North Korea from My BBQ Shack in Hackensack

By Robert Egan and Kurt Pitzer
Read by Traber Burns

Robert Egan could have been a roofing contractor, like his father. Instead, he opened a barbecue restaurant. His interest in the search for Vietnam-era POWs led to an introduction to North Korean officials desperate to improve relations with the United States. So Egan turned his restaurant into Camp David, with pork ribs.

During tumultuous years that saw the death of Kim Il Sung, the rise of Kim Jong Il, the Bush “Axis of Evil,” and North Korea’s successful test of a nuclear weapon, Egan advised North Korea’s deputy ambassador to the United Nations, informed for the FBI, vexed the White House, and nearly rescued a captured U.S. Navy vessel. Based on true events, this fast-paced tale shows how far one citizen can go in working for peace.