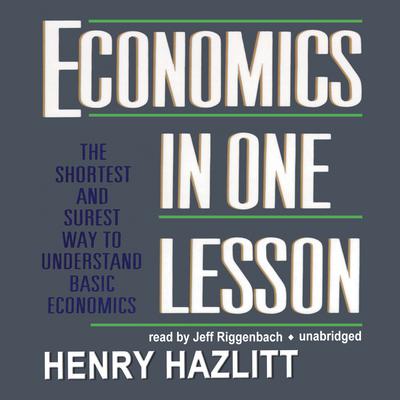 Economics in One Lesson: The Shortest and Surest Way to Understand Basic Economics

A million-copy seller, Henry Hazlitt’s Economics in One Lesson is a classic economic primer. But it is also much more, having become a fundamental influence on modern “libertarian” economics of the type espoused by Ron Paul and others. Called by H. L. Mencken “one of the few economists in history who could really write,” Henry Hazlitt achieved lasting fame for this brilliant but concise work. In it, he explains basic truths about economics and the economic fallacies responsible for unemployment, inflation, high taxes, and recession, as well as illustrating the destructive effects of taxes, rent and price controls, inflation, trade restrictions, and minimum-wage laws.

Economics in One Lesson is deceptively prescient and far-reaching in its efforts to dissemble economic fallacies that are so prevalent they have almost become a new orthodoxy. Many current economic commentators across the political spectrum have credited Hazlitt with foreseeing the collapse of the global economy, which occurred more than fifty years after the initial publication of this seminal work. Hazlitt’s focus on non-governmental solutions, strong—and strongly reasoned—antideficit position, and general emphasis on free markets, economic liberty of individuals, and the dangers of government intervention make Economics in One Lesson every bit as relevant and valuable today as it has been since publication.

“A magnificent job of theoretical exposition.” —Ayn Rand
“There is no other modern book from which the intelligent layman can learn so much about the basic truths of economics in so short a time.” —F. A. Hayek, Nobel Prize–winning economist
“If there were a Nobel Prize for clear economic thinking, Mr. Hazlitt’s book would be a worthy recipient…like a surgeon’s scalpel, it cuts through…much of the economic nonsense that has been written in recent years about our economic ailments.” —J. W. Hanes, former undersecretary of the treasury
“Hazlitt was a remarkably lucid writer, and this short book is justly regarded as a classic…But it comes across even better in Jeff Riggenbach’s interpretation. Riggenbach has a knack for making routine discursive sentences come alive…He sounds reasonable, engaging and thoroughly likeable.” —AudioFile

Henry Hazlitt (1894–1993), was a libertarian philosopher, an economist, and a journalist for the Wall Street Journal, New York Times, and Newsweek, among other publications. He was the founding vice-president of the Foundation for Economic Education and an early editor of The Freeman magazine. He wrote several books and is most well known for his book Economics in One Lesson.