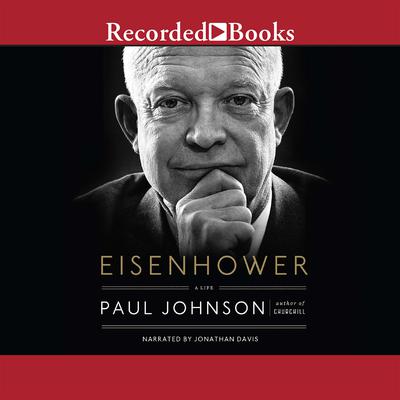 Acclaimed historian Paul Johnson's lively, succinct biography of Dwight D. Eisenhower explores how his legacy endures today. In the rousing style he's famous for, celebrated historian Paul Johnson offers a fascinating biography of Dwight D. Eisenhower, focusing particularly on his years as a five-star general and his two terms as president of the United States. Johnson chronicles Ike's modest childhood in Kansas, his college years at West Point, and his rapid ascent through the military ranks, culminating in his appointment as supreme commander of the Allied Forces in Europe during World War II. Johnson then paints a rich portrait of Ike's presidency, exploring his volatile relationship with Vice President Nixon, his abhorrence of isolationism, and his position on the cold war, McCarthyism, and the civil rights movement. Many elements of Eisenhower's presidency speak to American politics today, including his ability to balance the budget, his skill in managing an oppositional Congress, and his warnings about the military-industrial complex. This brief yet comprehensive portrait will appeal to biography lovers as well as to enthusiasts of presidential history and military history alike.

“Frequently surprises, even startles, us with new views of past events and fresh looks at the characters of the chief world movers and shakers in politics, the military, economics, science, religion, and philosophy.” —Wall Street Journal
“Johnson brings to his subject a vitality that can’t be matched.” —New York Times
“Johnson is a brilliant writer, fluent, precise, crisp, and in full command of the music of words.” —Baltimore Sun
“His zesty, irreverent narratives teach more history to more people than all the post-modernist theorists, highbrow critics, and dons put together.” —Times Literary Supplement
“Accomplished historian and biographer Johnson…covers all the major facets of Eisenhower’s career, beginning with his boyhood in rural Kansas and ending with his tenure as president of the United States…with an emphasis on his personality and character, including his flair for public relations. Johnson’s contribution will serve as a great introduction to ‘Ike’ the man.” —Publishers Weekly
“An ideal primer for novices or those looking to brush up on America’s thirty-fourth president…a satisfying snapshot of a life dedicated to public service.” —Booklist