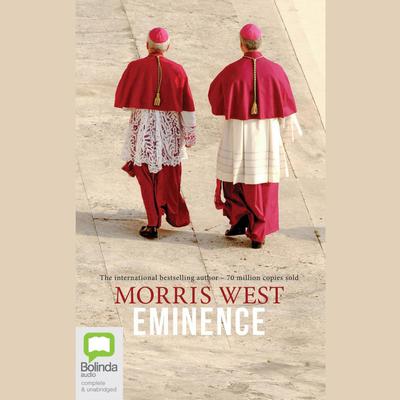 As a young and outspoken priest, Luca Rossini was brutally tortured in an Argentine military prison, and then nursed back to health by the beautiful Isabel.

Exiled to Rome to avoid scandal, Rossini becomes a cardinal and the pope's confidante. He is admired and feared by his colleagues, for he understands the Church, speaks frankly and knows how to present his ancient faith to the media. When the pope becomes gravely ill and a successor must be chosen, Rossini takes a central role.

In the midst of the political intrigue that surrounds the selection of a new pope, Isabel arrives in Rome-along with Rossini's daughter. Suddenly, Rossini must confront painful memories of Argentina and the scandalous passion of his long-suspended love affair.

Eminence is Morris West at the peak of his powers as a novelist, offering profound insights into the workings of the Catholic Church in a gripping personal story.

Morris West (1916–1999) was a successful novelist, playwright, and artist. At the age of fourteen, he entered the Christian Brothers seminary “as a kind of refuge” from a difficult childhood. He attended the University of Melbourne and worked as a teacher. In 1941 he left the Christian Brothers without taking final vows. During World War II he worked as a code-breaker, and for a time he was private secretary to former prime minister Billy Hughes. After the war, West became a successful writer and producer of radio serials. In 1955 he left Australia and lived with his family in Austria, Italy, England and the United States. He also worked for a time as the Vatican correspondent for the British newspaper, the Daily Mail. He wrote 30 books and many plays, and several of his novels were adapted for film. His books were published in twenty-eight languages and sold more than seventy million copies worldwide. Each new book he wrote after he became an established writer sold more than one million copies.