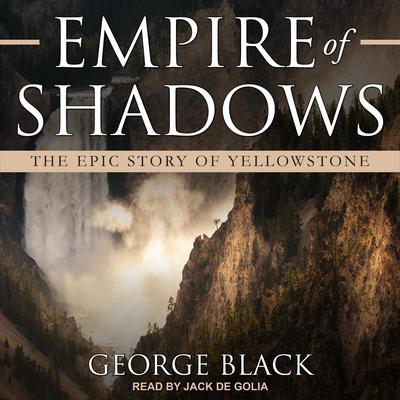 Empire of Shadows: The Epic Story of Yellowstone

Empire of Shadows is the epic story of the conquest of Yellowstone, a landscape uninhabited, inaccessible and shrouded in myth in the aftermath of the Civil War. In a radical reinterpretation of the nineteenth century West, George Black casts Yellowstone's creation as the culmination of three interwoven strands of history—the passion for exploration, the violence of the Indian Wars and the "civilizing" of the frontier—and charts its course through the lives of those who sought to lay bare its mysteries: Lt. Gustavus Cheyney Doane, a gifted but tormented cavalryman known as "the man who invented Wonderland"; the ambitious former vigilante leader Nathaniel Langford; scientist Ferdinand Hayden, who brought photographer William Henry Jackson and painter Thomas Moran to Yellowstone; and General Phil Sheridan, Civil War hero and architect of the Indian Wars, who finally succeeded in having the new National Park placed under the protection of the U.S. Cavalry. George Black's Empire of Shadows is a groundbreaking historical account of the origins of America's majestic national landmark.

. . . a masterful and riveting history of the exploration of Yellowstone. Empire of Shadows will forever change our understanding and conception of this sacred American place. —David Grann, author of The Lost City of Z