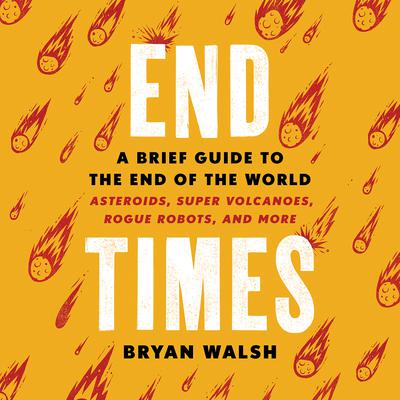 End Times: A Brief Guide to the End of the World

Newsweek and Bloomberg popular science and investigative journalist Bryan Walsh explores the history of extinction and offers a cutting-edge examination of existential risk, the dangerous mistakes we have yet to pay for, and concrete steps we can take to protect ourselves and future-proof our civilization.

What is going to cause our extinction?

How can we save ourselves and our future?

End Times is a compelling work of skilled reportage that peels back the layers of complexity around the unthinkable-and inevitable-end of humankind. From asteroids and artificial intelligence to volcanic supereruption to nuclear war, 15-year veteran science reporter and TIME editor Bryan Walsh provides a stunning panoramic view of the most catastrophic threats to the human race.

In End Times, Walsh examines threats that emerge from nature and those of our own making: asteroids, supervolcanoes, nuclear war, climate change, disease pandemics, biotechnology, artificial intelligence, and extraterrestrial intelligence. Walsh details the true probability of these world-ending catastrophes, the impact on our lives were they to happen, and the best strategies for saving ourselves, all pulled from his rigorous and deeply thoughtful reporting and research.

Walsh goes into the room with the men and women whose job it is to imagine the unimaginable. He includes interviews with those on the front lines of prevention, actively working to head off existential threats in biotechnology labs and government hubs. Guided by Walsh's evocative, page-turning prose, we follow scientific stars like the asteroid hunters at NASA and the disease detectives on the trail of the next killer virus.

Walsh explores the danger of apocalypse in all forms. In the end, it will be the depth of our knowledge, the height of our imagination, and our sheer will to survive that will decide the future.

END TIMES isn't all doom and gloom. Walsh adds some lightness to otherwise grim visions of humankind's future by sprinkling in humor and colorful anecdotes throughout the book, like a story about his visit to an insect food fair [...] Ultimately, END TIMES serves as a wake-up call, letting people know that 'we're not helpless.' —Science News
Walsh doesn't revel in sensationalistic pessimism. He interviews biologists, climatologists, anthropologists, geologists, astronomers, and even a moral philosopher to grapple with a tough subject: human extinction. —Publishers Weekly
Walsh interviews people at the forefront of many industries - from government offices to NASA to research labs - working to avoid global catastrophes. Through his findings, Walsh furthers our understanding of what an apocalypse might look like and digs into the biggest threats facing our world. —TIME
Grow out your apocalypse beard and strap on your doomsday sandwich board, we're all gonna die! End Times takes an unflinching look at the myriad ways the world might end -- from planet-smashing asteroids and humanity-smothering supervolcanoes to robotic revolutions and hyper-intelligent AIs. —Engadget
A comprehensive, terrifying, but ultimately hopeful new book. —Vox, Future Perfect
I travel a lot for work, and End Times is a fascinating book that will make any flight go faster. Walsh lays out all of the insane ways human kind can end. Volcanos, asteroids, hostile AI, disease, and perhaps the most terrifying of all-the robot uprising. Walsh balances out terror by detailing how likely these situations really are, as well as the best strategies for saving ourselves. —Ryan Serhant, bestselling author of Sell It Like Serhant
A much needed and very revealing book everybody interested in the universe will enjoy. —Washington Book Review
Walsh details the science on existential risks, from supervolcanoes to global war - many of them amplified by chaotic governance. [...] as billionaires focus on escape [...] Walsh envisions survival for the rest of us - a scenario of subterranean refugees subsisting on insects, fungi and rats. —Nature
A disturbing, riveting, and ultimately hopeful call to arms. —KIRKUS
Walsh does wonders in unknotting the dizzying agendas fueling many of the existential risks explored in END TIMES. —Scientific Inquirer
It's not easy thinking about all the ways the world can end, let alone writing a whole book about them. But Bryan Walsh has managed the feat and then some, delivering a book that's as analytically astute as it is terrifically written. It takes a special kind of writer to pull this off, and in Bryan Walsh we found him. —Ian Bremmer, New York Times bestselling author of Us Versus Them: The Failure of Globalism
Instead of freaking out, read End Times. It's a wise and weirdly hopeful journey into civilization's darkest nightmares. —Jeff Goodell, author of The Water Will Come
A harrowing chronicle of a range of threats that could bring about human extinction in the not-so-distant future. —The Washington Post
In End Times, Bryan Walsh has put together the loudest, scariest wake-up call possible. And yet it's not a book without hope: Walsh lays out a challenging series of believable scenarios that can allow human beings to thrive along with our fellow earth-dwellers, in a way that requires only qualities we already have: compassion, intelligence, focus, and determination. —Mark Bittman, New York Times columnist and bestselling author
Bryan Walsh has reported from the front lines of the 21st century's first pandemic and the backrooms of the war against climate change. He knows science, geopolitics and more. In End Times, he has put together an invaluable guide to living through the worst of times, and offers hope that we might just be able to survive them. —Karl Taro Greenfeld, author of China Syndrome: The True Story of the 21st Century's First Great Epidemic
It takes a bold reporter and subtle thinker to survey the mortal threats we face and find a way towards hope; yet that is what Bryan Walsh has done in this terrifying, fascinating exploration of existential risk. Cascading catastrophes of the manmade kind are so frightful to consider that we naturally look the other way; but Walsh invites us to reckon with the world we've made, a crucial step towards taking responsibility for saving us from ourselves. The asteroids, the supervolcanoes, the plagues are not of our making; but the nukes, the climate disruption, the weaponized pathogens and challenges of AI are. With a storyteller's art and a scientists tools, Walsh helps us think the unthinkable, takes us to the observatories and laboratories where the future is made. Travel with him to doomsday and back, and nothing looks the same. —Nancy Gibbs, coauthor of New York Times bestseller The Presidents Club: Inside the World's Most Exclusive Fraternity
We are all going to die, but never before have we been so likely to all do it at the same time. Beyond the alarm and the science, the nuclear showdowns and the climate disasters, rests the bigger question of how we humans contend with the impermanence of our own existence. Bryan Walsh's gripping thought experiment reminds us that the only truly permanent thing we humans can do is go extinct. —Douglas Rushkoff, author of Present Shock: When Everything Happens Now
TIME MAGAZINE, "11 New Books to Read in August! —ECO WATCH, "Best Environmental Books of August"