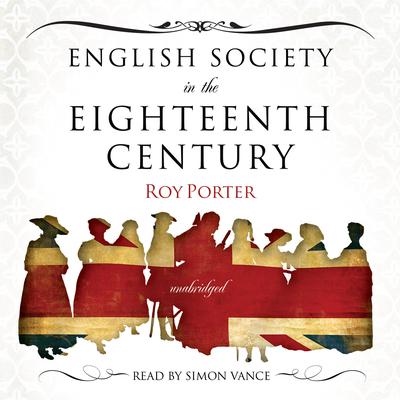 English Society in the Eighteenth Century

In this boldly drawn portrait of eighteenth-century England, Roy Porter defines a nation from its princes to its paupers, from its metropolis to its smallest hamlet. The topics covered run the gamut, covering diet, housing, prisons, rural festivals, bordellos, plays, paintings, and work and wages. This text’s broad scope makes it a must-have for any lover of English history, or history in general. Written in a reader-friendly manner, it is the perfect companion book to any eighteenth-century novel, providing readers with a deeper understanding of the times.

Roy Porter’s new edition of his celebrated book of English cultural history was revised in light of changes in the climate of debate that occurred in the seven years after its first publication.

“Offers a succession of vivid images of thought, politics, work culture, deviance, sex-life and smell of eighteenth-century Englishmen…It is the gusto, the vigor, and the fun that make this book.” —Sunday Times
“Covers a vast area of historical scholarship, both traditional and contemporary…His writing glows…and positively crackles when expressing the vigor and zest of what has been rightly called the age of exuberance.” —Times Literary Supplement
“A pioneering work.” —Observer
“Vivid, witty, and entertaining…Easily the best general account of eighteenth-century society that we have.” —New York Review of Books
“A brilliant work…Porter’s picture of eighteenth-century England is boldly drawn…He ranges far and wide, from princes and paupers and from the metropolis to the smallest hamlet. Stay-making and corsetry, prisons, rural festivals, diet and housing, bordellos and sex therapists…paintings and plays, work and wages, balloons and bastady are only a fraction of the topics covered by this breathtaking narrative…No one will fail to learn much from Porter’s bustling book.” —London Review of Books
“Porter bowls through eighteenth-century society with the brash confidence of the ’rubicund tradesman’ whose world he recaptures so well, deploying formidable erudition, vigorous ideas, and skillful expression to provide a book which should inform, arouse and provoke.” —New Statesman
“Roy Porter’s engrossing, encyclopedic history of English life in the 1700s receives its due in this fine production, which will appeal to many more than the bibliophile and the audiophile. While he touches on politics and personages, Porter’s approach is expansive and demographic, a survey of every factor that shaped social life, and produced changes over the century. Only a narrator as accomplished as Simon Vance and as immaculate in articulation could convey the sharpness and precision Porter achieves through a steady accumulation of detail. What for a lesser reader might be only a plodding list of population figures, or descriptions of land holdings, becomes instead a window into a past time, each sentence to the point, illuminating, engaging the intellectual and the sensual imagination.” —AudioFile