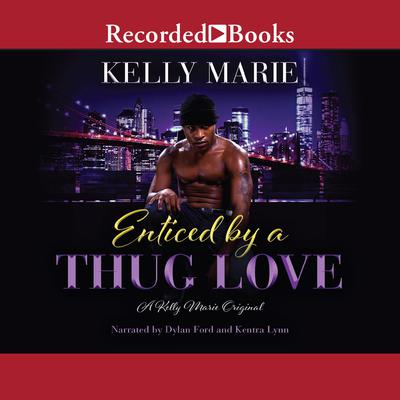 Enticed by a Thug Love

By Kelly Marie
Read by Dylan Ford  and Kentra Lynn

The Enticed By A Thug Love Series: Book 1

Hes rude, judgmental, intimidating and everything you dont want in a man, yet for some reason you find yourself enticed by a thug love - well thats what happens when three women cross paths with the Ramsey men. Kanada Alton is a twenty-six year old mother who finds herself homeless by the hands of her baby father. With her only hope to find her parents who moved to another State, she sets out for New York and in doing so she crosses paths with Alvaro Wrath Ramsey - the King of New York. Their meeting is anything but pleasant when Kanada makes a mistake leaving Wrath believing shes an unfit mother. Still, he finds himself having to help the young mother and soon Kanada finds herself falling for the rude Wrath. But is her past really that? And can Wrath overlook what brought them together?AMoya Morse is in the wrong place at the wrong time which leads her in the path of Pharaoh Legion Ramsey - or was it destiny? Their worlds collide on that one night and despite Legion being a man thats carrying too many demons and believes hes too damaged to love, AMoya finds herself drawn to him, even when he tries to push her away. However, eventually he gives in. But when he reveals a life changing secret to her, was he right when he said that he was too damaged for love? Nothing in life usually bothers Dior Alfred except drug dealers. She hates everything about them and what they do, for personal reasons. So when she meets Jashawn Surge Ramsey he is the prime example of why she hates them so much. But soon Surges life is in danger and the same person who hates him ends up helping him. And while doing so, Dior falls for the same person she grew to hate. Their connection is real and neither is willing to let the other go but their paths were connected long before they met, in a way they didnt expect. So what happens when they have no choice but to walk away? Come take a ride with Kanada, AMoya and Dior whose lives are turned upside down when they find themselves enticed by a thug love.