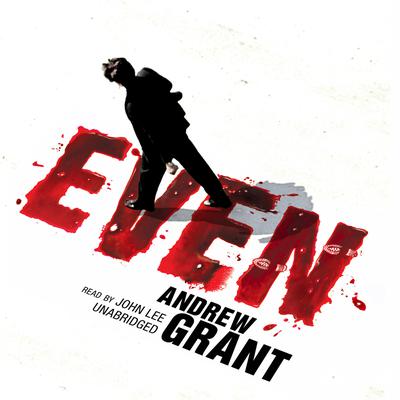 Walking to his New York City hotel late one night, Royal Navy intelligence operative David Trevellyan notices a huddled shape in the entrance of an alley. A homeless man has been murdered. As he steps forward, a cop car arrives, and Trevellyan suddenly realizes he’s been set up. When the NYPD hands the problem to the FBI, the British consulate tells him he’s on his own. With no idea who’s a friend and who’s a foe, he penetrates deep into a huge international conspiracy. The price of failure will be death, and the reward for success will be redemption, both for himself and for the huddled corpse in the alley. The motivation will be his cherished, life-long belief: You don’t get mad, you get even.

“Modern noir at its best…Even is brilliantly plotted and smart, and delivers the bone-jarring kick of a .45. Here’s hoping author Grant is hard at work on the next installment featuring his thoroughly compelling tough guy hero, David Trevellyan.” —Jeffery Deaver, New York Times bestselling author
“In Even, Andrew Grant introduces British naval intelligence officer David Trevellyan, a man born to fight and trained to win, locked in a suspenseful contest with terrifying adversaries. An excellent thriller that feels like breaking news.” —Thomas Perry, New York Times bestselling author
“Jason Bourne fans will welcome Grant’s thrill-packed debut…[Grant] never strikes a false note in a plot that could have gone over-the-top in lesser hands.” —Publishers Weekly (starred review)
“The plot and its wonderfully breathless pace are over the top in the best Bond tradition—listeners will risk missing their exit or spending extra time in the parking lot because they simply cannot stop listening…John Lee’s patrician British accent perfectly embodies the coolly ruthless Trevellyan.”  —AudioFile
“A stylish, suspenseful, and overall stunning debut, essential for all thriller collections.” —Library Journal (starred review)
“Trevellyan is likely to be compared to [Grant’s] brother’s hero, Jack Reacher, or even to James Bond…there can be no doubt that we have a new guy on the block who requires attention.” —Booklist
“[Trevellyan] is both as violent and as humor-driven as his ‘double-O’ predecessor, and never more than a page or two away from the next action sequence.” —BookPage