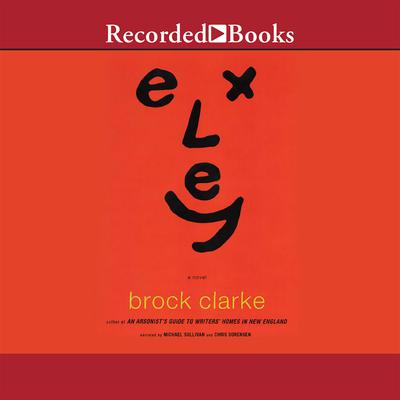 Best-selling author Brock Clarke is acclaimed for his wry, absurdist humor. In Exley, Clarke introduces nine-year-old Miller, who becomes convinced that his father-who left without explanation-must have run away to join the military, and is now lying comatose in a VA hospital. Thinking a visit from his father's favorite writer will help revive him, Miller decides to track down A Fan's Notes author Frederick Exley. "[A] charming story, at times hilarious ."-Library Journal

“Clarke has a distinctively winning style. He imagines characters so careful in their reasoning that they are deeply, maddeningly unreasonable but also tenderly hapless at the same time. Mr. Clarke is able to make their isolation both heart-rending and comically absurd.” —New York Times
“It’s the flashes of insight into what it’s like to fiercely love a-far-from-perfect father and his sad-sack hero despite their flaws that will move you.” —San Francisco Chronicle
“A book that charms without seeming to try.” —Austin Chronicle
“Remarkable...In the hands of a less talented writer, the novel’s layers, twists, and identity puzzles could strain the belief of even the most credulous reader; but Clarke’s narrative assurance and unfailingly realistic characters allow him to pull off the literary equivalent of a half-court shot. This would have been a hard novel to write even adequately, but Clarke’s performance here is extraordinary; it’s far and away the best work of his career.” —NPR.org
“Frederick Exley’s classic 1968 account of his epic alcoholism, A Fan’s Notes, bears the oxymoronic subtitle A Fictional Memoir. It is the space between those words, between real and fabricated memory, that Clarke examines...With humor as black as Exley’s liver, Clarke picks apart the fictions we tell one another—and those we tell ourselves.” —Entertainment Weekly
“Oddly brilliant...The luminously engaging plot reveals the deceptions we cling to in order to survive...Clarke’s breathtaking creativity gives unexpected power to his quirky, touching story.” —Daily Beast
“Clarke expertly evokes other authors who deal with children’s quests in the face of tragedy and mental illness, from J.D. Salinger to Jonathan Safran Foer. In the end, however, the novel comes off as its own original foray into the land of floating realities, and explains why, though so many of us claim to want the truth, in the end we are almost always content to believe in a well-reasoned lie.” —Time Out New York
“Wonderfully mysterious.” —Publishers Weekly
“Worthwhile listening.” —AudioFile
“Another literary high-wire performance by a novelist who is establishing himself as a unique voice in contemporary fiction...A seriously playful novel about the interweave of literature and life.” —Kirkus Reviews (starred review)
“Clever and tender...Clarke’s take on the cruel toll of the Iraq War is profound.” —Booklist

Brock Clarke is the author of An Arsonist’s Guide to Writers’ Homes in New England, which was a national bestseller and has appeared in a dozen foreign editions, as well as several other books. He lives in Portland, Maine, and teaches creative writing at Bowdoin College.