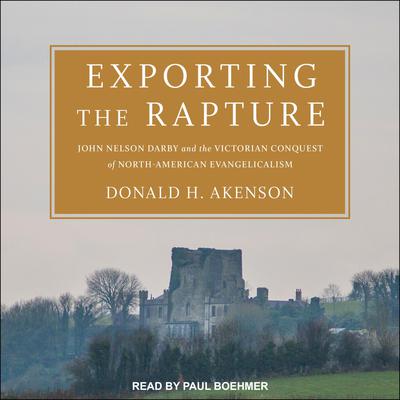 Exporting the Rapture: John Nelson Darby and the Victorian Conquest of North-American Evangelicalism

Apocalyptic millennialism is one of the most powerful strands in evangelical Christianity. It is not a single belief, but across many powerful evangelical groups there is general adhesion to faith in the physical return of Jesus in the Second Coming, the affirmation of a Rapture heavenward of "saved" believers, a millennium of peace under the rule of Jesus and his saints and, eventually, a final judgement and entry into deep eternity.

A key figure in this process was John Nelson Darby. Akenson emphasizes that, as strong a personality as Darby was, the real story is that he became a vector for the transmission of a terrifically complex and highly seductive ideological system from the old world to the new. So beguiling, adaptable, and compelling was the new Dispensational system that Darby injected into North American evangelicalism that it continued to spread logarithmically after his death. By the 1920s, the system had become the doctrinal template of the fundamentalist branch of North American evangelicalism and the distinguishing characteristic of the bestselling Scofield Bible.

Donald Akenson grew up in Minnesota, received his BA from Yale and his PhD from Harvard, and is Douglas Professor of Canadian and Colonial History, Queen’s University, Ontario. He has published several award-winning books on the history of Ireland and on the development of the Judeo-Christian tradition.