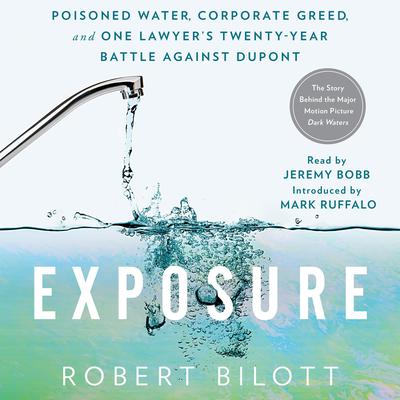 Silent Spring meets Erin Brockovich in this eye-opening, riveting true story of the lawyer who spent two decades building a case against DuPont for its use of the hazardous, unregulated chemical PFOA, uncovering a history of environmental contamination that affects virtually every person on the planet, and the heartless behavior that kept it a secret for sixty years.

1998: Rob Bilott is a young lawyer specializing in helping big corporations stay on the right side of environmental laws and regulations. His life and career take an unexpected turn when he gets a phone call from a West Virginia farmer named Earl Tennant. Earl is convinced the creek on his property is being poisoned by runoff from a neighboring DuPont landfill. His cattle are dying in hideous ways, as is much of the surrounding wildlife. Earl hasn’t even been able to get a water sample tested by any state or federal regulatory agency or find a local lawyer willing to take the case. As soon as they hear the name DuPont—the area’s largest employer—they shut him down.

Once Rob sees the thick, foamy water that bubbles into the creek, the gruesome effects it seems to have on livestock, and the disturbing frequency of cancer and other health problems in the surrounding area, he’s persuaded to fight against the type of corporation his firm routinely represents. After intense legal wrangling, Rob ultimately gains access to hundreds of thousands of pages of DuPont documents, some of them fifty years old, that reveal the company has been holding onto decades of studies proving the harmful effects of a chemical called PFOA, used in making Teflon. PFOA is often called a “forever chemical,” because once inside the body, it remains there for a long period of time, building up faster than the body can excrete it, and once in the environment, it does not break down or degrade for millions of years, contaminating the planet forever. Although aware of these properties, DuPont kept its scientific findings from the public while at the same time dumping hundreds of thousands of pounds of PFOA waste into the Ohio River and landfills. The case of one farmer soon spawns a class action suit on behalf of seventy thousand residents—and the shocking realization that virtually every person on the planet has been exposed to PFOA and carries the chemical in his or her blood.

What emerges is an unforgettable, David and Goliath-style legal drama about malice and manipulation, the failings of environmental regulation; and one lawyer’s twenty-year struggle to expose the truth about this previously unknown—and still unregulated—chemical that we all have inside us.

“For Erin Brockovich fans, a David vs. Goliath tale with a twist…Bilott is an engaging narrator who breaks our hearts with tales of clients suffering excruciating ailments and amazes us with endless 14-hour days scouring technical reports in search of that one clue that might help him make his case.” —New York Times Book Review
“Bilott presents his own real-life legal thriller…Readers will be riveted…smartly told and briskly paced, with keen attention to pertinent details.” —Booklist (starred review)
“Narrator Jeremy Bobb turns this nonfiction audiobook into a page-turning drama…Bobb builds this story at an unhurried pace that slowly develops to a climax…Bobb’s is a powerful performance showing how greed and complacency nearly destroyed a state and its citizens.” —AudioFile
“A meticulously detailed account of that legal battle. Bilott is an engaging writer, and this work reads like a combination legal thriller and court deposition…His narrative grounded in a strong sense of place as he develops close ties with the residents of the small Ohio and West Virginia communities impacted by the pollution.” —Library Journal
“Bilott’s admirable crusade is widely known thanks to coverage by journalists; this book adds plenty of detail and further context.” —Kirkus Reviews
“Rob Bilott uncovered the most heinous corporate environmental conspiracy in history. The evidence of it is literally in your blood. Rob makes one shocking discovery after another while bringing the culprit to justice. You won’t be able to put Exposure down.” —Ken Cook, president of the Environmental Working Group
“An intimate account of one of the most appalling environmental crimes in modern history. Exposure is a classic story of American good and American evil—of the triumph of ingenuity, diligence, and self-sacrifice over psychopathic corporate nihilism. Rob Bilott is a hero of our time.” —Nathaniel Rich, author of Losing Earth: A Recent History