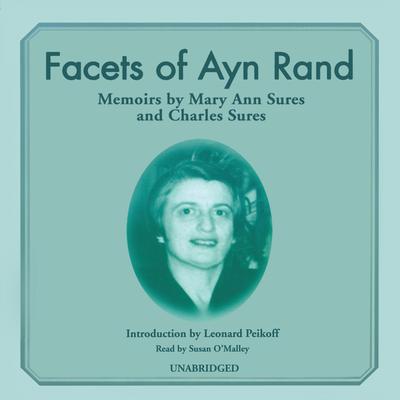 Facets of Ayn Rand is based on forty-eight hours of interviews with Mary Ann and Charles Sures, longtime personal friends of Ayn Rand. Their recollections make vividly real the Ayn Rand they knew so well.

Here are many examples of not only Ayn Rand’s mind and intellectual generosity in action but also lesser-known aspects of this unique woman. The result is the experience of an actual larger-than-life person.

“The person in this book is the same person I myself knew for so long; reading these pages is almost like having Ayn Rand in the room again.” —Leonard Peikoff

“Mary Ann and Charles Sures were longtime personal friends of Ayn Rand—Mary Ann for twenty-eight years, Charles for almost twenty. Their recollections in this delightful memoir make vividly real the Ayn Rand they knew so well.” —Leonard Peikoff
“Through the vivid recollections of the Sures, the reader learns what it was like to have Ayn Rand as a boss, a hostess, a client, a co-hobbyist, a mentor, and a close personal friend…In revealing Ayn Rand as she lived, day in and day out, Charles and Mary Ann have done loving justice to her memory.” —Intellectual Activist
“There is a lot of information to be found in the four hours of this audiobook…The audiobook does do justice to its title.” —Audiobookstoday.com
“Susan O’Malley captures both Charles and Mary Ann’s voice fantastically. She reads each response with a passion that followers of Objectivism will relate to and admire. In addition, she properly places emphasis on certain passages, adding a compelling feature to this audiobook often found lacking in other biographies.” —Audiobookcafe.com

Mary Ann Sures, an art historian, taught art history at New York University and at Hunter College. She lectures on the application of Objectivist esthetics to the visual arts. Her friendship with Ayn Rand began in 1954. She married Charles Sures in 1965.