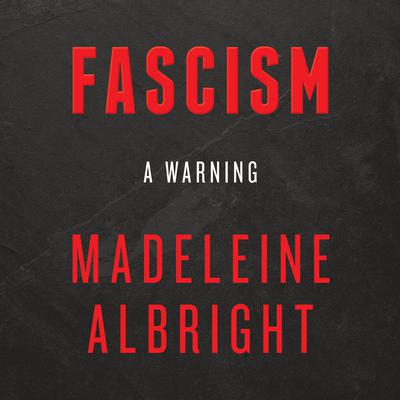 From one of the most admired international leaders, comes a timely, considered, and personal look at the history and current resurgence of fascism today and the virulent threat it poses to international freedom, prosperity, and peace.

At the end of the 1980s, when the Cold War ended, many, including former Secretary of State Madeleine Albright, believed that democracy had triumphed politically once and for all. Yet nearly thirty years later, the direction of history no longer seems certain. A repressive and destructive force has begun to re-emerge on the global stage—sweeping across Europe, parts of Asia, and the United States—that to Albright, looks very much like fascism.

Based on her personal experience growing up in Hungary under Hitler and the Communist regime that followed World War II, as well as knowledge gleaned from her distinguished diplomatic career and insights from colleagues around the globe, Albright paints a clear picture of how fascism flourishes and explains why it is once again taking hold worldwide, identifying the factors contributing to its rise. Most importantly, she makes clear what could happen if we fail to act against rising fascist forces today and in the near future, including the potential for economic catastrophe, a lasting spike in terrorist activity, increased sectarian violence, a rash of large-scale humanitarian emergencies, massive human rights violations, a breakdown in multilateral cooperation, and nearly irreparable self-inflicted damage to America’s reputation and capacity to lead.

Albright also offers clear solutions, including adjusting to the ubiquity of social media and the changing nature of the workplace, and understanding ordinary citizens’ universal desire for sources of constancy and morality in their lives. She contends that we must stimulate economic growth and narrow the gap between the rich and poor, urban and rural, women and men, and skilled and unskilled; work across borders to respond to transnational challenges; and ultimately recognize that democracy’s unique virtue is its ability—through reason and open debate—to find remedies for its own shortcomings.

“Albright knows fascism when she sees it. Her personal look at this recurring global political trend takes listeners back to her early childhood, when she witnessed some of the consequences of fascism in Czechoslovakia. Known for her frank manner and direct approach, Albright brings these traits to her performance. Both qualities make her a strong narrator for this serious work…Her experiences as a diplomat serve her well as a narrator—she is confident, steady, and engaging.” —AudioFile
“Free of geopolitical jargon, her deceptively simple prose is sprinkled with shrewd observations about the emotions that underpin bad or wicked political decisions.” —Economist (London)
“Why has the momentum toward democracy and international comity slowed?…Who better to address these questions than Albright, whose life was shaped by fascism and whose contribution to the cultivation of democracy as a stateswoman and private citizen is unparalleled? In Fascism: A Warning Albright…draws on her personal history, government experience, and conversations with Georgetown students to assess current dangers and how to deal with them.” —New York Times Book Review
“Albright outlines the warning signs of fascism and offers concrete actions for restoring America’s values and reputation. There is priceless wisdom on every page.” —Booklist (starred review)
“A close observer of world governments sounds an alarm about threats to democracy…[and] offers an authoritative and well-grounded analysis of the growing rise of fascism around the world…Deteriorating social and economic conditions offer an opportunity for ‘a gifted pied piper’ to rise…Albright concludes with ten questions to ask of any prospective leader…Sage advice in perilous times.” —Kirkus Reviews
“Albright’s incisive analyses are enriched by her experiences as a refugee from Nazi-occupied Czechoslovakia…and as America’s diplomat-in-chief…Offers cogent insights on worrisome political trends.” —Publishers Weekly
“Having grown up in Czechoslovakia under the Nazi and Communist regimes, former Secretary of State Albright can give context to her discussion of the rise of reactionary tendencies in the world today.” —Library Journal 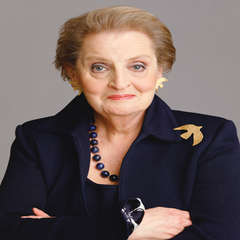 Madeleine Albright served as America’s sixty-fourth secretary of state from 1997 to 2001, the first woman to hold that position. Her distinguished career also includes positions on Capitol Hill, on the National Security Council, and as US ambassador to the United Nations. Since leaving office, she has written several New York Times bestselling books. She is a resident of Washington, DC, and Virginia.