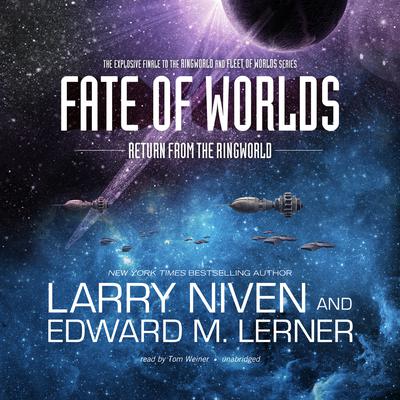 Fate of Worlds: Return from the Ringworld

For decades, the spacefaring species of known space have battled over the largest artifact—and grandest prize—in the galaxy: the all-but-limitless resources and technology of the Ringworld. Now, without warning, the Ringworld has vanished, leaving behind three rival war fleets.

Somethingmust justify the blood and treasure that have been spent.If the fallen civilization of the Ringworld can no longer be despoiled of its secrets, the puppeteers will be forced to surrender theirs—everyone knows that they are cowards. But the crises converging upon the trillion puppeteers of the Fleet of Worlds go far beyond even the onrushing armadas.

Adventurer Louis Wu and the exiled puppeteer known only as Hindmost, marooned together for more than a decade, escaped from the Ringworld before it disappeared. And throughout those years, as he studied Ringworld technology, Hindmost has plotted to reclaim his power.

One way or another, the fabled puppeteer race may have come to the end of its days.

“A new Known Space book, particularly one with new information about Puppeteers and their doings behind the scenes of human history, needs recommending within the science fiction community about as much as a new Harry Potter novel does, well, anywhere. But Niven and Lerner have produced a novel that can stand on its own as well as part of the Known Space franchise.” —Locus
“Exceptional freshness and suspense…Full of startling revelations about human and puppeteer politics.” —Booklist
“Tying together many story threads, the final title in the "Fleet of Worlds" series (a prequel to Niven's "Ringworld" series) brings to a stunning close a multivolume saga that has captured the imaginations of a multitude of readers…Coauthors Niven and Lerner use their expertise in depicting memorable human and alien characters to enhance a story that will attract attention from series fans as well as readers of hard sf.” —Library Journal

Edward M. Lerner worked in high tech and aerospace for thirty years, as everything from engineer to senior vice president, for much of that time writing science fiction as his hobby. Since 2004 he has written full-time. His novels range from near-future technothrillers, like Small Miracles and Energized, to futuristic mysteries, like The Company Man, to such traditional SF-adventure fare as Dark Secret and his InterstellarNet series. Collaborating with Larry Niven, he also wrote the space-opera epic Fleet of Worlds series of Ringworld companion novels. His 2015 novel, InterstellarNet: Enigma, won the inaugural Canopus Award “honoring excellence in interstellar writing.” His fiction has also been nominated for Locus, Prometheus, and Hugo awards. In shorter forms, his writing has appeared in anthologies, collections, and many science fiction magazines and websites. He also writes about science and technology, most notably including Trope ing the Light Fantastic: The Science behind the Fiction.