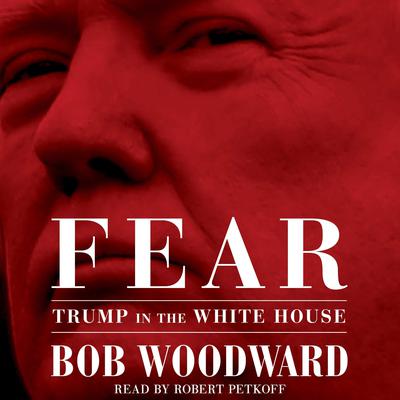 Fear: Trump in the White House

An Audible.com “Best of the Year” Finalist in Politics

A Literary Hub Pick of the Ultimate Fall Books

A Kirkus Reviews Pick of the Week

THE INSIDE STORY ON PRESIDENT TRUMP, AS ONLY BOB WOODWARD CAN TELL IT

Fear is the most intimate portrait of a sitting president ever published during the president’s first years in office. The focus is on the explosive debates and the decision-making in the Oval Office, the Situation Room, Air Force One and the White House residence.

Fear presents vivid details of the negotiations between Trump’s attorneys and Robert Mueller, the special counsel in the Russia investigation, laying out for the first time the meeting-by-meeting discussions and strategies. It discloses how senior Trump White House officials joined together to steal draft orders from the president’s Oval Office desk so he would not issue directives that would jeopardize top secret intelligence operations.

“It was no less than an administrative coup d’état,” Woodward writes, “a nervous breakdown of the executive power of the most powerful country in the world.”

“A devastating reported account of the Trump Presidency that will be consulted as a first draft of the grim history it portrays…What Woodward has written is not just the story of a deeply flawed President but also, finally, an account of what those surrounding him have chosen to do about it.” —New Yorker
With the steely, measured delivery of a seasoned newscaster, Robert Petkoff narrates an audiobook that truly lives up to its title. As he has done for decades since breaking the Watergate scandal, reporter Bob Woodward dissects the White House, in this case since the election of Donald Trump. The results are frightening. Using hundreds of hours of interviews with White House sources, notes from meetings, journals, and other available information, Woodward describes Trump as a man who refuses to read research before making major decisions and ignores and belittles the advice of experts, instead running the Oval Office on instinct and rash decisions. Woodward and Petkoff humanize other key members of the White House including embittered Chief of Staff John Kelly, erratic former Chief of Staff Steve Bannon, occasional voice of reason Ivanka Trump, and a host of others. It's a fascinating, often horrifying work of journalism." —
“In an age of ‘alternative facts’ and corrosive tweets about ‘fake news,’ Woodward is truth’s gold standard…Explosive… devastating…jaw-dropping.” — Washington Post
“A damning picture of the current presidency.” — CBS News
“An unprecedented inside-the-room look through the eyes of the President’s inner circle…Stunning.” —CNN
“Woodward’s latest book shows the administration is broken, and yet what comes next could be even worse.” — Atlantic
“Senior officials, acting as lone wolves concerned with preserving their own reputations, spoke to Woodward on their own—with some granting him hours of their time out of a fear of being the last person in the room to offer his or her viewpoint.’” —Politico
“Kornacki holds nothing back about how the 1990s have come to define our nation’s current partisan politics…The Red and the Blue is a perfect primer on how we can learn from our past if we want to make a better future for ourselves.” —Audible.com
“With the steely, measured delivery of a seasoned newscaster, Robert Petkoff narrates an audiobook that truly lives up to its title.” —AudioFile
“A dish-filled tiptoe through the current White House in the company of an all-knowing tour guide, legendary Washington Post investigative reporter and definitive insider Woodward.” —Kirkus Reviews (starred review)