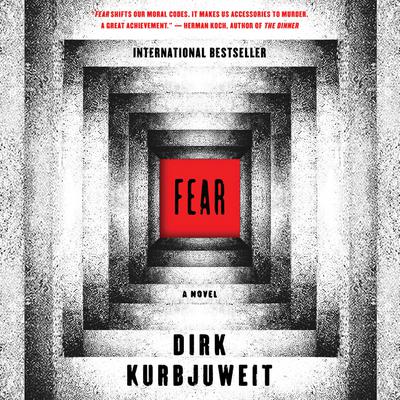 An acclaimed German writer makes his American debut with this gripping and sophisticated thriller reminiscent of The Dinner and the early novels of Ian McEwan, about the murder of a neighbor who had been harassing a middle-class family—and the relative imprisoned for the crime.

"I had always believed my father capable of a massacre. Whenever I heard on the news that there had been a killing spree, I would hold my breath, unable to relax until it was clear that it couldn't have been him."

Randolph Tiefenthaler insists he had a normal childhood, though he grew up with a father who kept thirty loaded guns in the house. A modestly successful architect with a wonderful family and a beautiful home, he soon finds his life compromised when his father, a man Randolph loves yet has always feared, is imprisoned for murder.

Fear is the story of the twisted events leading up to his father’s incarceration. It begins when Randolph and his family move into a new building and meet their neighbor, Dieter Tiberius, the peculiar yet seemingly friendly man living in the basement apartment. As the Tiefenthalers settle into their home, they becoming increasingly disturbed as Dieter’s strange behavior turns malevolent. Randolph unravels the tale of Dieter’s harassment—the erotic letters he sends to Rebecca, his spying, his accusations of child abuse, the police reports he filed against them. Finally, Randolph admits his of own feelings of desperation and helplessness, which ultimately led to his father’s intervention.

As Randolph plumbs the depths of his own uncertainty surrounding the murder—pondering fundamental questions about masculinity, violence, and the rule of law—his reliability is slowly but irrevocably called into doubt. The result is an unsettling meditation on middle-class privilege and "civilized life" that builds to a shocking conclusion.

Dirk Kurbjuweit is a successful writer and journalist in his native Germany. He has been awarded several prestigious prizes for his journalism, including the Egon Erwin Kisch Prize and the Novel Herzog Media Prize. He is also the author of several nonfiction and fiction titles, three of which have been adapted into feature films. He lives in Berlin.