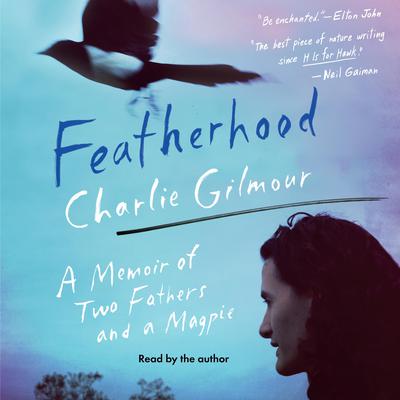 Featherhood: A Memoir of Two Fathers and a Magpie

H is for Hawk meets The Duke of Deception in this wry, moving story of a young man who, as his estranged father is dying, saves a baby magpie only to find that caring for the mischievous bird has, in fact, saved him.

One spring day, a baby magpie falls out of its nest and into Charlie Gilmour’s hands. Magpies, he soon discovers, are as clever and mischievous as monkeys. They are also notorious thieves, and this one quickly steals his heart. By the time the creature develops shiny black feathers that inspire the name Benzene, Charlie and the bird have forged an unbreakable bond.

While caring for Benzene, Charlie comes across a poem written by his biological father, an eccentric British poet named Heathcote Williams who vanished when Charlie was six months old. As he grapples with Heathcote’s abandonment, Charlie is drawn to the poem, in which Heathcote describes how an impish young jackdaw—like magpies, also a member of the crow family—fell from its nest and captured his affection. Over time, Benzene helps Charlie unravel his fears about repeating the past—and embrace the role of father himself.

A bird falls, a father dies, a child is born. Featherhood is the unforgettable story of a love affair between a man and a bird. It is also a beautiful and affecting memoir about childhood and parenthood, captivity and freedom, grief and love.

“A moving account of [Gilmour’s] attempts to make sense of his deeply complicated father while assessing his own suitability for fatherhood, wrestling with the question of nature versus nurture, all while caring for a magpie.” —The Times (London)
“In a captivating memoir, Gilmour recounts his frustrating search for his father…A sensitive, often moving chronicle of transformation for bird and man.” —Kirkus Reviews (starred review)
“Featherhood is an astonishing achievement…It’s the best piece of nature writing since H is for Hawk, and the most powerful work of biography I have read in years. It announces Charlie Gilmour as a major new writing talent.” —Neil Gaiman, #1 New York Times bestselling author
"Featherhood is one of the best books I’ve ever read. I urge you to seek it out, buy it, and be enchanted. It’s incredibly moving and I loved every single page.” —Elton John