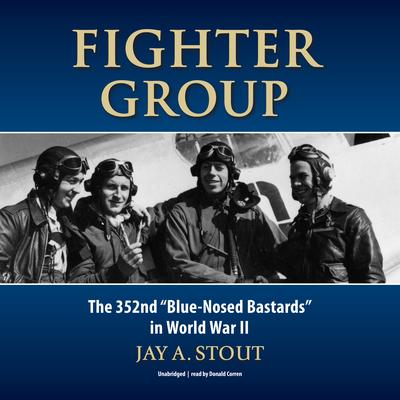 By Jay A. Stout
Read by Donald Corren

Winner of the San Diego Book Award for History

As described by award-winning author Jay A. Stout, the 352nd Fighter Group was one of the Eighth Air Force’s most successful fighter units and counted history’s two top-scoring P-51 aces among its ranks. This book—the most comprehensive work ever to cover the actions of a single USAAF fighter unit—details the air actions of not only the group’s notable aces, but also the rank-and-file fliers who carried the bulk of the load. It describes the 352nd’s activities from its formation at the close of 1942, its movement to England and its combat operations flying P-47s and P-51s against the Third Reich.

Although the book covers the unit’s actions as a whole, it also follows several pilots in detail. Rich descriptions of tactics and equipment, personal reflections, letters home, amusing anecdotes and, of course, detailed descriptions of air combat. Not simply an award-winning historian, Stout draws from his own combat experience as a fighter pilot to make these discussions credible, interesting and real.

Jay A. Stout breaks new ground in World War II aviation history with this gripping account of one of the war’s most highly decorated American fighter groups.

“This may be the finest book yet written about the air war over Europe during World War II.” —Air & Space Smithsonian
“Vivid combat stories and details about what it was like in a wartime fighter squadron. A great book.” —Colonel C. E. “Bud” Anderson, triple ace in World War II
“Jay Stout the historian has teamed up with Jay Stout the fighter pilot to produce a first-class combat history of a first-class World War II fighter group.” —Eric Hammel, author of The Road to Big Week
“Jay Stout’s rousing tale of the 352nd Fighter Group brings to life the exploits of aviators who helped dismantle the Third Reich. Stout’s crisp, concise writing powers a narrative that highlights a collection of aviators who destroyed more than 700 German aircraft. The book is certain to take its place with other memorable accounts of European combat.” —John F. Wukovits, author of Black Sheep

Jay A. Stout is a retired Marine Corps fighter pilot who flew thirty-seven combat missions in the F/A-18 Hornet during Desert Storm. His work has been read on the floor of the US Senate, and he has appeared as a combat aviation specialist on Fox, Al Jazeera, and NPR. His earlier books include Hell’s Angels and The Men Who Killed the Luftwaffe. He lives near San Diego, California.