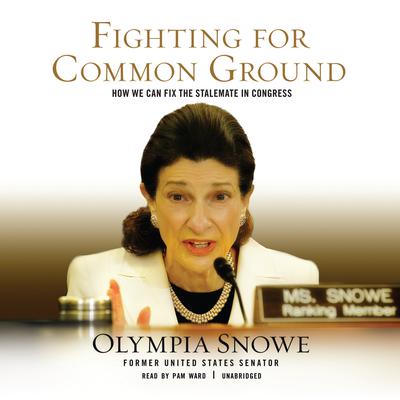 Fighting for Common Ground: How We Can Fix the Stalemate in Congress

An outspoken centrist, Senator Snowe stunned Washington in February 2012 when she announced she would not seek a fourth term and offered a sharp rebuke to the Senate, citing the dispiriting gridlock and polarization. After serving in the legislative branch at the state and federal levels for forty years, including eighteen years in the US Senate, she explained that Washington wasn't solving the big problems anymore.

In this timely call to action, she explores the roots of her belief in principled policy-making and bipartisan compromise. A leading moderate with a reputation for crossing the aisle, Senator Snowe proposes solutions for bridging the partisan divide in Washington, most notably through a citizens' movement to hold elected officials accountable.

Senator Snowe recounts how the tragedies and triumphs of her personal story helped shape her political approach. Born in Augusta, Maine, Senator Snowe was orphaned at nine and raised by an aunt and uncle. When she was twenty-six, her husband, a Maine state representative, was killed in a car accident. Already dedicated to public service, she ran for and won her husband's seat.

Fighting for Common Ground includes anecdotes from throughout Snowe's career and addresses her working relationships with Presidents Reagan through Obama, Senator Ted Kennedy, Majority Leader Bob Dole, and many others. As a senior member of the powerful Senate Finance Committee, the high-profile Commerce and Intelligence Committees, and the Small Business Committee, Senator Snowe has been directly involved with the most talked-about legislative challenges of recent decades: the country's response to 9/11, the 2008 financial crisis, the Affordable Care Act, the debt ceiling debacle, and much more.

Drawing on the lessons she's learned as a policymaker and the frustration she shares with the American people about the government's dwindling productivity, Senator Snowe passionately argues that the government has now lost its way, shows how this happened, and proposes ways for the world's greatest deliberative body to once again fulfill its mission.

“Known for working across party lines in her eighteen years in the US Senate, Republican Snowe, from Maine, felt driven from the legislative body by acrimonious partisanship and declined to run for reelection in 2012…In this heartfelt call to action, she details the cost to the American public of a Congress so polarized that it passes record low numbers of laws and can’t agree on a budget…Snowe offers a passionate plea to Americans to insist on changes in the Senate, including filibuster reform, biennial budgeting, and a five-day workweek for Congress.” —Booklist
“Olympia Snowe has left the Senate, but thank goodness, she hasn’t left the fight. After decades of leadership as a force for moderation and common sense in Washington, she now raises a banner as a private citizen in this well-argued, compelling account of what’s gone wrong in politics—and what can be done. It is especially refreshing to hear the perspective of an admired, moderate Republican who has always put country first.” —David Gergen, director of the Harvard Kennedy School’s Center for Public Leadership
“Part autobiography and part political call to arms, this is a compelling encapsulation of a long life dedicated to public service… Ward’s perfect pacing keeps the narrative flowing whether dealing with the high dudgeon of the early days of women in Congress or detailing vital but sometimes stultifying discussions of budgets, committee meetings, and cloakroom battles. Ward’s vocal power also highlights what we can infer from Snowe’s chronicle of a government lost in the desert.” —AudioFile

Olympia Snowe was born in Augusta, Maine, in 1947 and earned a degree in political science from the University of Maine in 1969. Senator Snowe is only the fourth woman in American history to be elected to both houses of Congress and the first to also serve in both houses of a state legislature. When first elected to Congress in 1978 at the age of thirty-one, Snowe was the youngest Republican woman, and the first Greek American woman, ever elected to Congress. She has won more federal elections in Maine than any other person since World War II and is now the third-longest serving female in the history of Congress. Snowe is married to former Maine governor John R. McKernan, Jr., and lives in Falmouth, Maine.