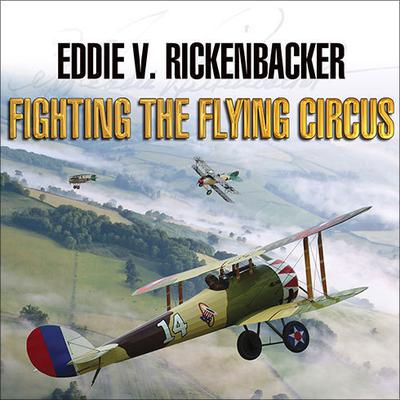 Captain Eddie V. Rickenbacker, originally from Ohio, was best known as one of the commanders of the 94th "Hat-in-the-Ring" Squadron, a crack unit of pilots that included many former members of the famed Lafayette Escadrille. The 94th ended the war in France with the highest number of air victories of any American squadron. Captain Rickenbacker later belonged to an association of pilots and Great War air veterans who, in the years immediately following the Second World War, invited many of the new "young" aces from the Pacific and European theaters for informal lectures. These men never lost their keen interest in aviation.

John Pruden . . . happens to have one of those golden voices. . . . This was a fascinating book. . . . I always thought Eddie Rickenbacker was larger than life. This combat diary added an unexpected touch of humility to him. I highly recommend this book to any reader interested in the history of the United States Air Force. —Major Joel Rudy, USAF
“Pruden’s performance brings out the author’s competiveness and cockiness as well as his recognition of his inexperience. Rickenbacker’s story shows the ability of the American soldier to adapt to combat.” —AudioFile

Eddie V. Rickenbacker (1890–1973) was an American fighter ace in World War I and a Medal of Honor recipient. He was also a race car driver and automotive designer, a government consultant in military matters, and a pioneer in air transportation, particularly as the longtime head of Eastern Air Lines.