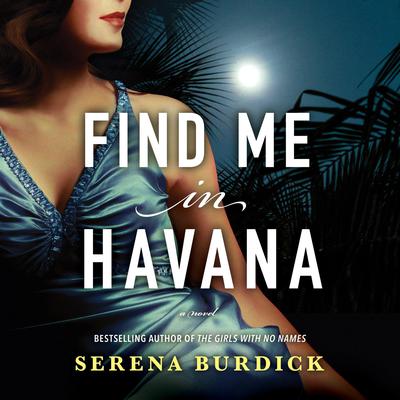 Find Me in Havana: A Novel

By Serena Burdick
Read by Marisol Ramirez  and Frankie Corzo

A stunning new novel of historical fiction from the author of The Girls with No Names based on the true unsolved murder of Cuban-born Hollywood actress Estelita Rodriguez.

Cuba, 1936. As her family struggles to recover from the Cuban Revolution, Estelita’s own world opens when she’s “discovered” singing in Havana nightclubs. At fifteen, her dreams to travel to America come true with the invitation to sing at the Copacabana. There, she begins a whirlwind romance with Chu Chu Martinez, a handsome actor she later marries. But when Chu Chu forbids her from performing, Estelita takes their daughter, Nina, and escapes to Hollywood.

Big Sur, 1966. Nina Rodriguez grew up enamored by her mother’s beauty and glamour. She still doesn’t understand how her vivacious mother could have died so quickly from influenza and suspects a more sinister plot pointing to her mother’s most recent romance. When Nina finds herself repeating her mother’s destructive patterns with men, she looks to the lessons of her mother’s past to find a new way forward.

Based on the true events of Estelita Rodriguez’s sensational life and exclusive interviews with the real Nina, Find Me in Havana beautifully captures the love, sacrifice and deep understanding that can only come from a mother-daughter relationship.

Serena Burdick graduated from the American Academy of Dramatic Arts in California before moving to New York City to pursue a degree in English Literature at Brooklyn College. She is the author of The Girls with No Names, and Girl in the Afternoon, which won the 2017 International Book Award in the historical fiction category.