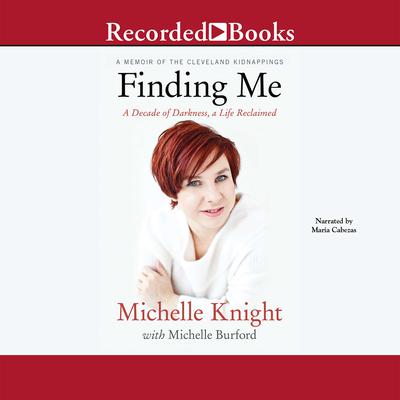 Finding Me: A Decade of Darkness, a Life Reclaimed: A Memoir of the Cleveland Kidnappings

By  Michelle Knight , with Michelle Burford
Read by Maria Cabezas

One of Audible’s Best Audiobooks of 2014: Bios and memoirs

Michelle was a young single mother when she was kidnapped by a local school bus driver named Ariel Castro. For more than a decade afterward, she endured unimaginable torture at the hand of her abductor. In 2003 Amanda Berry joined her in captivity, followed by Gina DeJesus in 2004. Their escape on May 6, 2013, made headlines around the world. Barely out of her own tumultuous childhood, Michelle was estranged from her family and fighting for custody of her young son when she disappeared. Local police believed she had run away, so they removed her from the missing persons lists fifteen months after she vanished. Castro tormented her with these facts, reminding her that no one was looking for her, that the outside world had forgotten her. But Michelle would not be broken. In Finding Me, Michelle will reveal the heartbreaking details of her story, including the thoughts and prayers that helped her find courage to endure her unimaginable circumstances and now build a life worth living. By sharing both her past and her efforts to create a future, Michelle becomes a voice for the voiceless and a powerful symbol of hope for the thousands of children and young adults who go missing every year.

“In the twelve years of doing the Dr. Phil show, no one has changed me like Michelle Knight and her story of survival. We are very excited about Michelle Knight’s new book and are passionately committed to its launch and ongoing support on our show, The Doctors, and all our social media platforms and other media.” —Dr. Phil McGraw

Michelle Knight is one of the three kidnapping victims tormented and imprisoned by Ariel Castro. After being held captive for more than ten years, Michelle is now recovering and rebuilding her life.

Michelle Burford is a celebrity ghostwriter and New York Times bestselling author. She holds a degree in English from Biola University and a master’s in educational psychology from Harvard. After working for a number of years working in magazine publishing—including helping launch O, The Oprah Magazine—Burford coauthored Olympic gymnast Gabby Douglas’ memoir Grace, Gold, & Glory; singer Toni Braxton’s Unbreak My Heart, and most recently Michelle Knight’s heartrending story, Finding Me. She loves to travel and is a contributing author to Let’s Go Greece.