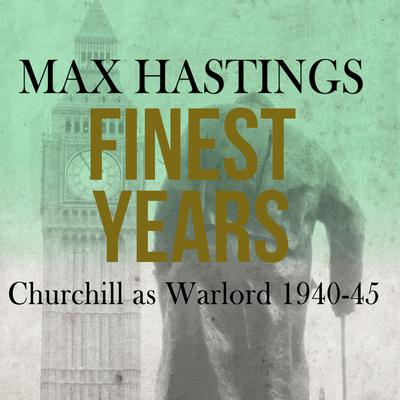 Preeminent military historian Max Hastings presents Winston Churchill as he has never been seen before. Winston Churchill was the greatest war leader Britain ever had. In 1940, the nation rallied behind him in an extraordinary fashion. But thereafter, argues Max Hastings, there was a deep divide between what Churchill wanted from the British people and their army, and what they were capable of delivering.

Himself a hero, he expected others to show themselves heroes also, and was often disappointed. It is little understood how low his popularity fell in 1942, amid an unbroken succession of battlefield defeats. Some of his closest colleagues joined a clamour for him to abandon his role directing the war machine.

Hastings paints a wonderfully vivid image of the Prime Minister in triumph and tragedy. He describes the ‘second Dunkirk’, in 1940, when Churchill’s impulsiveness threatened to lose Britain almost as many troops in north-west France as had been saved from the beaches; his wooing of the Americans, and struggles with the Russians. British wartime unity was increasingly tarnished by workers’ unrest, with many strikes in mines and key industries.

By looking at Churchill from the outside in, through the eyes of British soldiers, civilians and newspapers—and also those of Russians and Americans—Hastings provides new perspectives on the greatest Englishman. He condemns as folly Churchill’s attempt to promote mass uprisings in occupied Europe, and details ‘Unthinkable’—his amazing 1945 plan for an Allied offensive against the Russians to liberate Poland. Here is an intimate and affectionate portrait of Churchill as Britain’s saviour, but also an unsparing examination of the wartime nation which he led and the performance of its armed forces.

Max Hastings studied at Charterhouse and Oxford and became a foreign correspondent, reporting from more than 60 countries and 11 wars for BBC TV and the London Evening Standard. He has won many awards for his journalism. Among his bestselling books, Bomber Command won the Somerset Maugham Prize, and both Overlord and Battle for the Falklands won the Yorkshire Post Book of the Year Prize. After 10 years as editor and then editor-in-chief of the Daily Telegraph, he became editor of the Evening Standard, in 1996. A Fellow of the Royal Society of Literature, he was knighted in 2002.

Sir Max Hastings is the author of twenty-six books, most about conflict, and several made the New York Times bestsellers list. Between 1986 and 2002 he served as editor-in-chief of the London Daily Telegraph, then editor of the Evening Standard. He has won many prizes both for journalism and his books have been bestsellers translated around the world. He chronicles Vietnam with the benefit of vivid personal memories: first of reporting in 1967-68 from the United States, where he encountered many of the war’s decision-makers including President Lyndon Johnson, and then of successive assignments in Indochina for newspapers and BBC TV. He rode a helicopter out of the US Saigon embassy compound during the 1975 final evacuation.