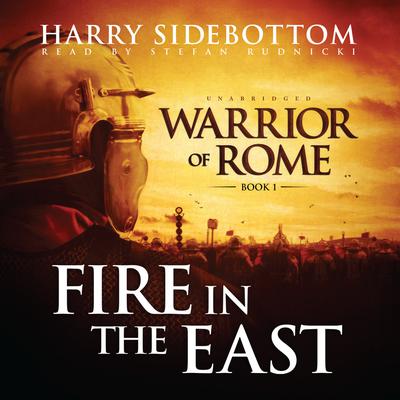 Fire in the East: Warrior of Rome, Book I

The Warrior of Rome Series: Book 1

AD 255: The Roman imperium is stretched to the breaking point, its authority and might challenged throughout the territories and along every border. One man is sent to marshal the defenses of a lonely city and to shore up the crumbling walls of a once indomitable symbol of Roman power, a man whose very name means war, a man called Ballista. So unfolds an epic drama—a story of empire, heroes, treachery, courage, and most of all, of brutal, bloody warfare.

The spectacular flair for explosive action, depth of literary and geographic knowledge, as well as the psychological complexity of the characters makes Fire in the East a trulyauthoritative historical adventure. Already a bestseller in the UK, Fire in the East is the first gripping installment in an immense grand narrative—the Warrior of Rome series.

“Sidebottom’s prose blazes with searing scholarship.”  —Times (London)
“[An] action-packed and detail-rich narrative. This novel of sharp swords and blunt wit should find an appreciative audience among bloodthirsty battle boys of all ages.” —Publishers Weekly
“The best sort of red-blooded historical fiction.” —Andrew Taylor, author of The American Boy
“Harry Sidebottom works on Rome’s third century the magic that Patrick O’Brian applied to Nelson’s navy. He has the touch of an exceptionally gifted storyteller, drawing on prodigious learning.”  —Timothy Severin, author of The Viking Trilogy