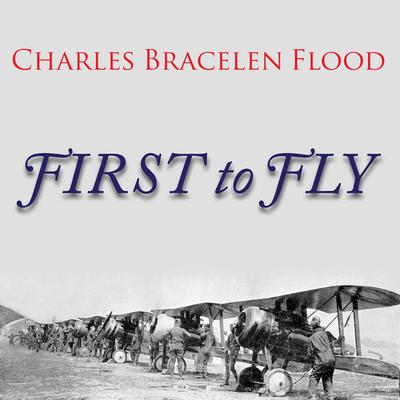 First to Fly: The Story of the Lafayette Escadrille, the American Heroes Who Flew for France in World War I

If the Wright brothers' 1903 flights in Kitty Hawk marked the birth of aviation, World War I can be called its violent adolescence—a brief but bloody era that completely changed the way planes were designed, fabricated, and flown. The war forged an industry that would redefine transportation and warfare for future generations. In First to Fly, historian Charles Bracelen Flood tells the story of the men who were at the forefront of that revolution: the daredevil Americans of the Lafayette Escadrille.
As citizens of a neutral nation from 1914 to early 1917, Americans were prohibited from serving in a foreign army, but many brave young souls soon made their way into European battle zones as ambulance drivers, nurses, and more dangerously, as soldiers in the French Foreign Legion. It was partly from the ranks of the latter group that the Lafayette Escadrille was formed in 1916 as the first and only all-American squadron in the French Air Service. Flying rudimentary planes, against one-in-three odds of being killed, these fearless young men gathered reconnaissance and shot down enemy aircraft, participated in the Battle of Verdun, and faced off with the Red Baron. Drawing on rarely seen primary sources, Flood chronicles the startling success of that intrepid band and gives a compelling look at the rise of aviation and a new era of warfare.

Top-notch military history. —Kirkus Starred Review
“Flood…has an eye for the high-octane drama when young men mix with war, airplanes, booze, and women…men who did not turn against their own country but put their lives up to fight for a cause, not because they had to but because it was the right thing to do.” —Wall Street Journal
“A perfect fit for the center of a trilogy of the beginning of aviation [alongside David McCullough’s The Wright Brothers and John F. Ross’ Enduring Courage]…These three excellent books clearly show how the Wright Brothers’ achievement at Kitty Hawk and their sound basic technology was picked up by the Europeans and how the wartime scenario in 1914 accelerated development of observation, pursuit, and bomber aircraft.” —Washington Times
“Flood’s final book is a page-turner, written in spare, vivid style like that of his literary hero, Ernest Hemingway.” —Lexington Herald-Leader (Kentucky)
“Profiles a handful of the courageous and colorful men who flew in [the Lafayette Escadrille] and were among America’s first combat pilots.” —American History
“The word ‘legendary’ is overused in military history, but it is almost an understatement for the Lafayette Escadrille…a cast of characters as wild as any in fiction…Flood tells their stories, based on their own accounts, with more emphasis on the personalities than on tactics and strategy…His portrayal of the fliers and the crazy life-and-death world they lived in is priceless. Top-notch military history.” —Kirkus Reviews (starred review)
“Charles Bracelen Flood’s book on the most legendary outfit of World War I is utterly absorbing, full of great anecdotes and harrowing dogfights. A compelling tribute to the young American men who fought in those flimsy contraptions that were the first warplanes, as well as the women who supported them behind the lines.” —Kevin Baker, author of The Big Crowd
“[In] a series of extended vignettes about the men who flew and the people who helped them…Tom Perkins offers an evenhanded reading, with no false emotion.” —AudioFile

Charles Bracelen Flood (1929-2014) wrote fifteen books, including Lee: The Last Years and Grant and Sherman: The Friendship That Won the Civil War, which Salon named one of the “Top 12 Civil War Books Ever Written,” and the New York Times bestselling novel Love Is a Bridge. He graduated from Harvard and was a past president of the PEN American Center.