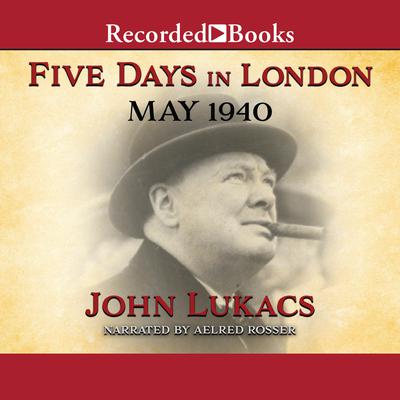 In May 1940, the course of history hung in the balance for five long days while Churchill's War Cabinet debated whether to negotiate with Hitler or continue opposition. In this compelling narrative, scholar and renowned author John Lukacs draws on memoirs and papers to convey the drama of those troubled times. Prime Minister Winston Churchill, regarded by many to be hotheaded, has only been in office for a fortnight when a quarter of a million British solders become trapped by the Germans at Dunkirk. With the public ill-informed and the Cabinet divided on what action to take, Churchill fights an uphill battle to gain both political and popular support. As the events unfold hour by hour, Churchill struggles to rally the citizenry and persuade the politicians to stand fast. John Lukacs' literary style and aelred Rosser's compelling interpretation transport you to London to listen in on the high level talks at 10 Downing Street and observe the mood of the people in the street.

John Lukacs was professor of history at Chestnut Hill College, Philadelphia, until his retirement and has been visiting professor at many universities. He is the author of twenty-one books, among them The Hitler of History, The Duel, The End of the Twentieth Century and the End of the Modern Age (which was nominated for the Pulitzer Prize), and A Thread of Years. He is the recipient of numerous academic honors and awards.