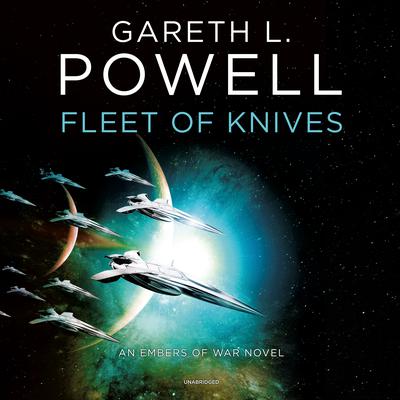 Fleet of Knives: An Embers of War Novel

The Embers of War Series: Book 2

The former warship Trouble Dog and her crew of misfits is called upon by the House of Reclamation to investigate a distress call from the human starship the Lucy’s Ghost. Her crew abandon their crippled ship and seek refuge aboard an abandoned, slower-than-light generation ship launched ten thousand years before by an alien race. However, the enormous ship contains deadly secrets of its own.

Recovered war criminal Ona Sudak faces a firing squad for her actions in the Archipelago War. But, at the last moment, she is smuggled out of her high-security prison. The Marble Armada has called for her to accompany its ships as observer and liaison as it spreads itself across the human Generality, enforcing the peace at all costs. The alien ships will not tolerate resistance, and all dissenters are met with overwhelming and implacable force. Then her vessel intercepts messages from the House of Reclamation and decides the Trouble Dog has a capacity for violence which cannot be allowed to endure.

As the Trouble Dog and her crew fight to save the crew of the Lucy’s Ghost, the ship finds herself caught between chaotic alien monsters on one side and, on the other, destruction at the hands of the Marble Armada.

“Amid almost nonstop action, with a jarring Joss Whedon-esque momentum, Powell delves into the characters as well as the themes with authority, putting himself in a league with Iain Banks and Ann Leckie.” —Booklist
“Everything you would want in a space opera and more.” —Tade Thompson, author of Rosewater
“Fast, exhilarating space opera, imaginative and full of life.” —Adrian Tchaikovsky, author of Children of Time
“Fast-paced, fun, and full of adventure.” —Ann Leckie, author of Ancillary Justice
“Exciting and deeply satisfying.” —Emma Newman, author of Planetfall

Gareth L. Powell is the author of five science-fiction novels and two short story collections. His third novel, Ack-Ack Macaque, book one in the Macaque Trilogy, was the winner of the 2013 BSFA novel award. He lives in Bristol, England.