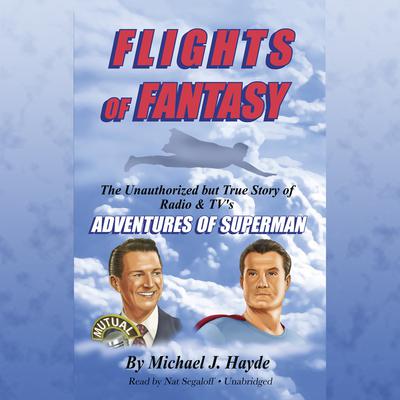 Flights of Fantasy: The Unauthorized but True Story of Radio & TV’s Adventures of Superman

Here is author Michael J. Hayde’s definitive work about Superman on radio and television. Hayde is well-known for My Name’s Friday: The Unauthorized but True Story of Dragnet and The Films of Jack Webb; and Little Elf: A Celebration of Harry Langdon, and this new treasure trove of information on the Man of Steel covers comprehensive episode logs for the radio series and the original television series, plus the complete story lines for two unproduced television series episodes, and dozens of “deleted scenes” taken right from the scripts.

“With so many books about Superman out there, it’s pleasing to know that one book has everything you’d want to know under one cover…An enjoyable read.” —Martin Grams Jr., author of The Twilight Zone: Unlocking the Door to a Television Classic
“Michael J. Hayde significantly broadens our empathy for the Man of Steel through his profound revelations surrounding an imposing figure based on popular myth. In a meticulously researched discourse, he supplies the gaps about a character that became a mid-twentieth century hero to the nation’s boys and girls. Hayde probes the backgrounds of the real-life individuals behind-the-scenes and before the microphones and cameras that intensified that aura. In breezy, comprehensive-style, he focuses on the radio and TV manifestations while interweaving timely inferences from the newspaper strip, comics, books, film, and other formats plus a prosperous merchandising trade. Lovers of the genre of juvenile adventures are rewarded by the author’s efforts to expose how one man wearing a cape and bearing incredible strength could pervade an impressionable younger generation and a society that pursued his exploits intensely.” —Jim Cox, author of Radio Crime Fighters

Michael J. Hayde is an author specializing in film, television, and radio history. His books include My Name’s Friday, Flights of Fantasy, and (coauthored with Chuck Harter) Little Elf. Mr. Hayde has appeared on such television programs as Unsolved Mysteries and TV Land’s Myths and Legends, and is a regular contributor to the annual Mid-Atlantic Nostalgia Convention in Maryland. He lives in Manassas, Virginia, with his wife and four children.