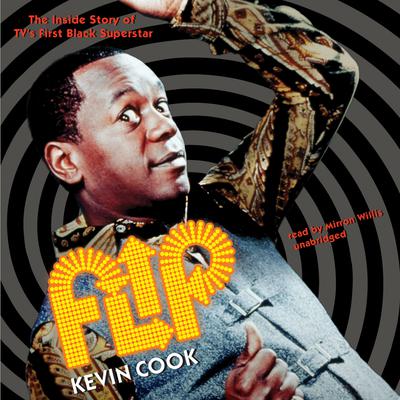 Flip: The Inside Story of TV’s First Black Superstar

The rags-to-riches story of a groundbreaking, beloved entertainer

When The Flip Wilson Show debuted in 1970, black faces were still rare on television, black hosts nonexistent. So how did Clerow "Flip" Wilson go from Jersey City grade-school dropout to national celebrity, heralded on the cover of Time as "TV's first black superstar"?

Flip is a candid, entertaining biography of a consummate comedian who changed the face of American popular culture. Kevin Cook chronicles Flip's meteoric rise through the Chitlin' Circuit of segregated nightclubs to his breakthrough on Johnny Carson's Tonight Show to his hit variety show, on which he created such outrageous and hilarious characters as the sassy Geraldine and flock-fleecing Reverend Leroy. As one of the biggest stars of his time, he performed and partied with Richard Pryor, George Carlin, Michael Jackson, Elvis Presley, and other stars of the 1970s.

Drawing on interviews with family, friends, and celebrities, Cook delivers the inspiring story of a complex man who broke the prime-time color barrier, blazing a trail for generations of African American performers who followed him.

“Drawing on interviews with family, friends, and Wilson’s colleagues, journalist Cook delivers a candid and entertaining look at Wilson’s meteoric rise…Cook’s fiercely honest biography captures the tumultuous and winning personality of the man who introduced many memorable characters to the world and who paved the way for black comedians such as Richard Pryor, Eddie Murphy, and Tyler Perry.” —Publishers Weely
“In this frank but somewhat sympathetic biography, Cook recounts how the comedian constantly practiced his art through the 1950s and ’60s and achieved his dream of fame in the early ’70s only to be eclipsed soon after by younger, bolder comedians…A well-told story of a man desperate to succeed in the rapidly changing world of American entertainment.” —Booklist

Kevin Cook is the author of The Last Headbangers, Titanic Thompson, and Tommy’s Honor. The former editor-in-chief of Golf Magazine, he has written for Sports Illustrated, GQ, Playboy, Details, Men’s Journal, and many other magazines, and he has appeared on ESPN, CNN, and Fox. He lives in New York City.