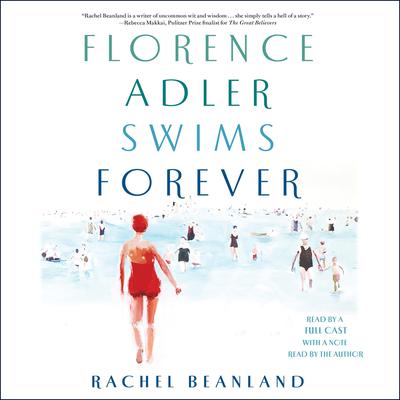 A USA Today Pick of the Year

A Good Morning America Selection of Best Books of Summer

An Indie Next Pick

Over the course of one summer that begins with a shocking tragedy, three generations of the Adler family grapple with heartbreak, romance, and the weight of family secrets.

“Rachel Beanland is a writer of uncommon wit and wisdom, with a sharp and empathetic eye for character. She’ll win you over in the most old fashioned of ways: She simply tells a hell of a story.” —Rebecca Makkai, Pulitzer Finalist for The Great Believers

Atlantic City, 1934. Every summer, Esther and Joseph Adler rent their house out to vacationers escaping to “America’s Playground” and move into the small apartment above their bakery. Despite the cramped quarters, this is the apartment where they raised their two daughters, Fannie and Florence, and it always feels like home.

Now Florence has returned from college, determined to spend the summer training to swim the English Channel, and Fannie, pregnant again after recently losing a baby, is on bedrest for the duration of her pregnancy. After Joseph insists they take in a mysterious young woman whom he recently helped emigrate from Nazi Germany, the apartment is bursting at the seams.

Esther only wants to keep her daughters close and safe but some matters are beyond her control: there’s Fannie’s risky pregnancy—not to mention her always-scheming husband, Isaac—and the fact that the handsome heir of a hotel notorious for its anti-Semitic policies, seems to be in love with Florence.

When tragedy strikes, Esther makes the shocking decision to hide the truth—at least until Fannie’s baby is born—and pulls the family into an elaborate web of secret-keeping and lies, bringing long-buried tensions to the surface that reveal how quickly the act of protecting those we love can turn into betrayal.

Based on a true story and told in the vein of J. Courtney Sullivan’s Saints for All Occasions and Anita Diamant’s The Boston Girl, Beanland’s family saga is a breathtaking portrait of just how far we will go to in order to protect our loved ones and an uplifting portrayal of how the human spirit can endure—and even thrive—after tragedy.

“A perfect summer read.” —USA Today
“Beanland’s novel draws the reader in…This is a book about the American dream. The dream is not without costs, and the dreamers are not immune to tragedy.” —New York Times Book Review
“Florence Adler Swims Forever is a tender, funny, frank look at how family and faith can frustrate us, sustain us, and keep us human.” —Blair Hurley, author of The Devoted
“Beanland is a writer of uncommon wit and wisdom, with a sharp and empathetic eye for character. She’ll win you over in the most old fashioned of ways: She simply tells a hell of a story.” —Rebecca Makkai, Pulitzer Prize finalist

Rachel Beanland’s essays have appeared in Creative Nonfiction and Broad Street, among other publications. She is a fiction student in the MFA program at Virginia Commonwealth University and holds bachelor’s degrees in art history and journalism from the University of South Carolina.