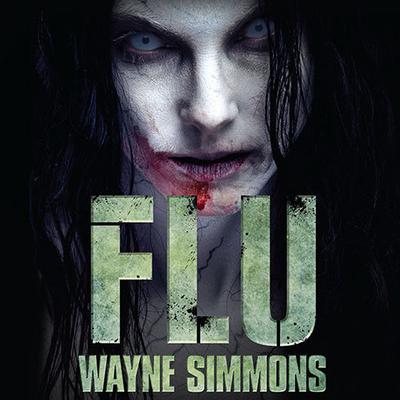 There's a nasty flu going round. An epidemic, they call it. The posters say to cover your mouth when you sneeze, and throw away the tissue. But such simple measures won't stop this flu. Because when you catch the flu, armed police come and lock you in your house to die alone. When you catch this flu, it kills you in days. And when you catch this flu, two hours after it's killed you, your eyelids snap open again . . . Flu is a pacey, terrifying, frighteningly real zombie horror story.

“Wayne Simmons is the bare knuckle boxer of the zombie genre. He hits hard, and he’s absolutely relentless.” —Joe McKinney, Bram Stoker Award–winning author of Flesh Eaters
Simmons writes like the grotesque lovechild of George A. Romero and Charles Dickens. —Physical Graffiti
“Wayne Simmons doesn’t write in the slow lane. Flu leaps at you in chapter one and leaves you breathless at the end. A brilliant zombie thriller.” —Jonathan Maberry, author of Patient Zero
“Narrator Michael Kramer delivers a pitch-perfect performance. His voice is low and weary, his tone thoroughly creepy. With deliberate pacing, the narrator takes his time with the story—heightening the book’s tension in a way that will make listeners squirm. Among the many zombie audiobooks published in recent years, this one manages to stand out from the pack.” —Publishers Weekly (starred review)

Wayne Simmons was born in Belfast, Ireland, and is the author of several horror novels, including Doll Parts, Drop Dead Gorgeous, Flu, and Fever.