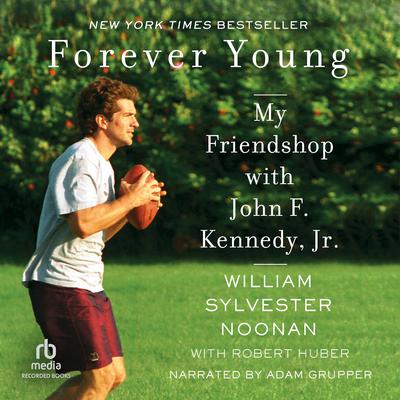 From the iconic image of a little boy saluting his father's casket to his tragic death at age thirty- eight, John F. Kennedy, Jr., was never far from the public eye. Now the friend who John was flying to see the night he died reveals the private man behind the public myth. Billy and John shared summers in Hyannisport and formed a bond in the Kennedy compound that lasted well into adulthood. With Forever Young, Noonan offers a unique glimpse into the private life of his boyhood friend-his courtship with Carolyn, his relationship with his mother, Jackie, and his struggle with being the son of a great man he hardly remembered. Affectionate yet candid, Noonan's deeply personal memoir ultimately emerges as the definitive portrait of the son of Camelot.

“[Noonan’s] frank but loyal memoir is an engrossing trip that covers the ’70s and early ’80s, when their crowd partied hard and John’s life was full of promise.” —People
“Grupper’s fluid, impartial delivery allows the material to speak for itself, resulting in an audio that is both easy to enjoy and easy to debate…A portrait of a flawed but intelligent individual who continually struggled under the weight of his legacy.” —Publishers Weekly
“Could not be more engaging…Adam Grupper is a marvelous interpreter of Kennedy’s story—understated but not dull, and conveying a tone that perfectly evokes Billy Noonan talking at various stages of his relationship with the departed icon.” —AudioFile