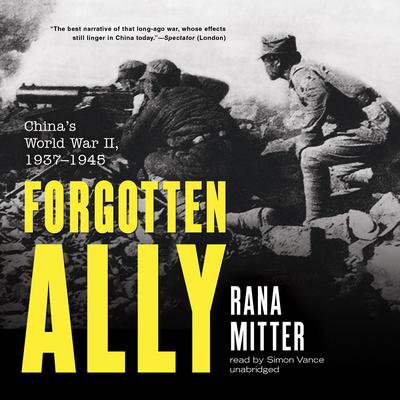 The epic, untold story of China's devastating eight-year war of resistance against Japan

For decades a major piece of World War II history has gone virtually unwritten. The war began in China two full years before Hitler invaded Poland, and China eventually became the fourth great ally, partner to the United States, the Soviet Union, and Great Britain. Yet its drama of invasion, resistance, slaughter, and political intrigue remains little known in the West.

Rana Mitter focuses his gripping narrative on three towering leaders: Chiang Kai-shek, the politically gifted but tragically flawed head of China's Nationalist government; Mao Zedong, the Communists' fiery ideological stalwart, seen here at the beginning of his epochal career; and the lesser-known Wang Jingwei, who collaborated with the Japanese to form a puppet state in occupied China. Drawing on Chinese archives that have only been unsealed in the past ten years, he brings to vivid new life such characters as Chiang's American chief of staff, the unforgettable "Vinegar Joe" Stilwell, and such horrific events as the Rape of Nanking and the bombing of China's wartime capital, Chongqing. Throughout, Forgotten Ally shows how the Chinese people played an essential role in the wider war effort, at great political and personal sacrifice.

Forgotten Ally rewrites the entire history of World War II, yet it also offers surprising insights into contemporary China. No twentieth-century event was as crucial in shaping China's worldview, and no one can understand China, and its relationship with America today, without this definitive work.

“Rana Mitter’s history of the Sino-Japanese War is not only a very important book, but it also has a wonderful clarity of thought and prose which makes it a pleasure to read.” —Antony Beevor, New York Times bestselling author of The Second World War
“Illuminating and meticulously researched…From the diaries of Chiang Kai-shek to those of national journalists and middle-class Chinese fleeing the conflict, these first-person observations are woven skillfully into his chronicle of the battles and struggles.” —Economist (London)
“Superb.” —New York Times
“An important, timely contribution to shedding light where there is currently much darkness…Mitter’s book demonstrates why to this day the Chinese view Japan with such animosity.” —Financial Times
“A remarkable story, told with humanity and intelligence; all historians of the second world war will be in Mitter’s debt… No one could ask for a better guide.” —Guardian (London)
“The best narrative of that long-ago war, whose effects still linger in China today.” —Spectator (London)
“Mitter has done an important service both in pulling together the complex narrative threads of this period and in reminding readers of China’s vital and largely neglected contribution to the Allied war effort…Mitter’s excellent history tells us why we need to remember it.” —New Statesman
“Mitter’s narrative élan, in the manner of David McCullough, creates a complex history that is urgently alive. An important, well-told tale of China at war.” —Kirkus Reviews
“This is the best study of China’s war with Japan (1937–1945) written in any language. It is comprehensive, thoroughly researched, and objective…For anyone interested in how China helped shape today’s world, this is a must-read.” —Akira Iriye, Charles Warren Professor of History (emeritus), Harvard University

Rana Mitter is a professor of modern Chinese history at the University of Oxford and the author of several books, including A Bitter Revolution. He is a regular contributor to television and radio in Britain and around the world. His writing has appeared in the Financial Times, the Guardian, and elsewhere.