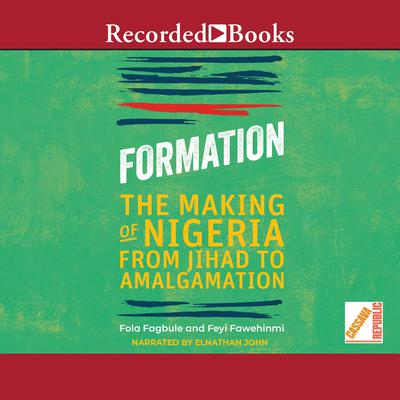 Formation: The Making of Nigeria from Jihad to Amalgamation

By Fola Fagbule  and Feyi Fawehinmi

What do you get when dare-devil jihadists, mad English missionaries and proud, stubborn, warring natives meet in a clash?

Formation: The Making of Nigeria from Jihad to Amalgamation tracks the unlikely series of events and characters that turned a collection of disparate nations into a British colony in 1914. But the story of Nigeria’s formation begins much earlier, in 1804 when the jihadists launched their attack on countries along the Niger river. What unfolds is a story of conquests and slavery, betrayals and bravery, rivers and riots, victors and vanquished, all of which are central to understanding modern Black struggles.

Formation runs, like the rivers Niger and Benue, through the rise and fall of empires. It explores Dan Fodio’s revolutionary jihad and the spread of Islam, the fall of the Oyo Empire, the influence of the returnee freed slaves, the growing influence of Christianity, and the palm oil politics in the Niger Delta in the territory that would come to be known as Nigeria. Inextricably linked to this is the story of the ascendency of the British Empire and the Industrial Revolution.

Influential figures of Nigeria’s historic past, like the founder of the Sokoto caliphate, Usman Dan Fodio; Yoruba linguist Samuel Ajayi Crowther; powerful slave trader Madam Tinubu; British colonial administrator Frederick Lugard; and suffragette and mother to Fela Kuti, Funmilayo Ransom-Kuti, are re-examined, moving them from myth to reality. Fagbule and Fawehinmi challenge the orthodox understanding of Nigeria’s past as merely a product of colonial interference, revealing an incredibly complicated portrait of a nation with a tangled history and self-determination.