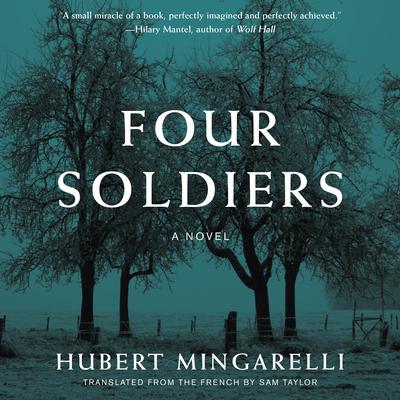 “A small miracle of a book, perfectly imagined and perfectly achieved.”
—Hilary Mantel, author of Booker Prize-winning novels Wolf Hall and Bring up the Bodies

A novel of war, revolution, youth, and friendship by the “remarkable” (Ian McEwan) French author of A Meal in Winter

Hubert Mingarelli’s simple, powerful, and moving stories of men in combat have established him as one of the most exciting new voices in international fiction.

In Four Soldiers he tells the story of four young soldiers in 1919, members of the Red Army during the Russian civil war. It is set in the harsh dead of winter, just as the soldiers set up camp in a forest in Galicia near the Romanian front line. Due to a lull in fighting, their days are taken up with the mundane tasks of trying to scratch together what food and comforts they can find, all the time while talking, smoking, and waiting. Waiting specifically for spring to come. Waiting for their battalion to move on. Waiting for the inevitable resumption of violence.

Recalling great works like Isaac Babel’s Red Cavalry, Ernest Hemingway’s A Farewell to Arms, and Stephen Crane’s The Red Badge of Courage, Four Soldiers is a timeless and tender story of young male friendships and the small, idyllic moments of happiness that can illuminate the darkness of war.

“Most movingly, it sketches the poignantly fragile friendships they develop in the shadow of so much death…Its simplicity lends it grandeur. One thinks of Maxim Gorky or even the early sketches of Tolstoy.” — Wall Street Journal
“Four Soldiers is no hectic and chaotic war novel. It unfolds in short, tightly focused chapters, and in spare, crystalline prose (beautifully translated by Sam Taylor)…Mingarelli manages to salvage tenderness from tragedy…[with] an acute reminder that these are not valiant, worldly men marching into battle but petrified, inexperienced boys.” —Minneapolis Star Tribune
“Everyday moments of happiness are hardened into bright and priceless diamonds by the pressure of the circumstances that surround them: the horror and misery of the Russian Civil War.” —Daily Mail (London)