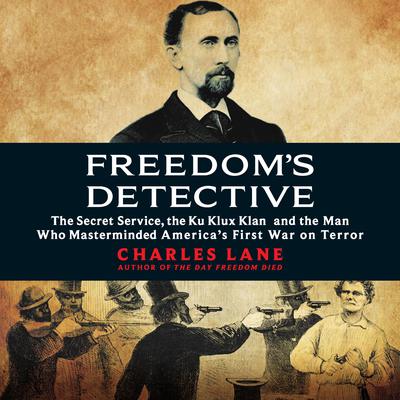 Freedom's Detective: The Secret Service, the Ku Klux Klan, and the Man Who Masterminded America’s First War on Terror

“This is a powerful, vitally important story, and Lane brings it to life with not only vast amounts of research but with a remarkable gift for storytelling that makes the pages fly by.” —Candice Millard, author of The River of Doubt and Hero of the Empire

Freedom’s Detective reveals the untold story of the Reconstruction-era United States Secret Service and their battle against the Ku Klux Klan, through the career of its controversial chief, Hiram C. Whitley

In the years following the Civil War, a new battle began. Newly freed African American men had gained their voting rights and would soon have a chance to transform Southern politics. Former Confederates and other white supremacists mobilized to stop them. Thus, the KKK was born.

After the first political assassination carried out by the Klan, Washington power brokers looked for help in breaking the growing movement. They found it in Hiram C. Whitley. He became head of the Secret Service, which had previously focused on catching counterfeiters and was at the time the government’s only intelligence organization. Whitley and his agents led the covert war against the nascent KKK and were the first to use undercover work in mass crime—what we now call terrorism—investigations.

Like many spymasters before and since, Whitley also had a dark side. His penchant for skulduggery and dirty tricks ultimately led to his involvement in a conspiracy that would bring an end to his career and transform the Secret Service.

Populated by intriguing historical characters—from President Grant to brave Southerners, both black and white, who stood up to the Klan—and told in a brisk narrative style, Freedom’s Detective reveals the story of this complex hero and his central role in a long-lost chapter of American history.

“This is a powerful, vitally important story, and Lane brings it to life with not only vast amounts of research but with a remarkable gift for storytelling that makes the pages fly by.” —Candice Millard, New York Times bestselling author
“I thought I knew how the Klan was destroyed after the Civil War, but after reading Charles Lane’s wonderful book, I realized I knew almost nothing.” —Laurence Leamer, author of The Lynching: The Epic Courtroom Battle That Brought Down the Klan
“Charles Lane has brilliantly reconstructed the hidden history of America’s first Secret Service and its ingenious war on the Klan. At its heart is America’s very own 007: the charming, roguish, and ultimately heroic figure of Hiram C. Whitley. Settle in with this page-turner, and let the story sweep you away.” —Gary Gerstle, author of Liberty and Coercion: The Paradox of American Government from the Founding to the Present
“Freedom’s Detective is a riveting narrative history about early attempts to crackdown and even stamp out the Ku Klux Klan’s reign of domestic terrorism. The amount of original research Lane conducted is prodigious. His prose style is irresistible. An overall magnificent read!” —Douglas Brinkley, New York Times bestselling author
“Well-written and carefully researched…Parallels between what Lane calls the first war on terror and the current one…make clear why this lesser-known chapter in American law enforcement merits attention. American history buffs won’t want to miss this one.” —Publishers Weekly
“An important, highly readable, and timely study of a key historical period, the origins of the KKK, and one man’s battle against its campaign of hatred and bloodshed.” —Booklist
“A detail-laden, arduously researched chronicle.” —Kirkus Reviews

Charles Lane first learned about the Colfax Massacre case while covering the Supreme Court for The Washington Post. His journalism career has taken him from Washington to Tokyo, Berlin to Bosnia, Havana to Johannesburg. A former editor of The New Republic, Lane has written for Foreign Affairs, The New York Review of Books, and The Atlantic. He graduated Phi Beta Kappa from Harvard and studied law at Yale. He lives in the Washington, D.C., area.