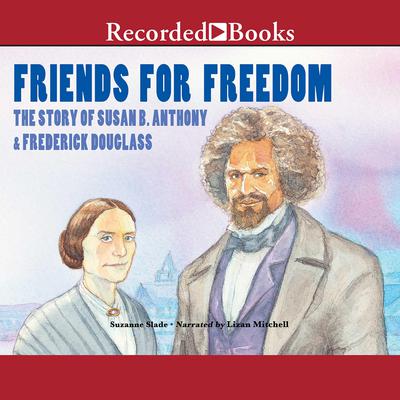 Friends for Freedom: The Story of Susan B. Anthony & Frederick Douglass

No one thought Susan B. Anthony and Frederick Douglass would ever become friends. The former slave and the outspoken woman came from two different worlds. But they shared deep-seated beliefs in equality and the need to fight for it. Despite naysayers, hecklers, and even arsonists, Susan and Frederick became fast friends and worked together to change America.

“A powerful testament to a friendship that spanned decades as it challenged conventions and ‘helped America grow up, too.’” —Publishers Weekly (starred review)
“In a most inappropriate friendship for their time, Susan B. Anthony and Frederick Douglass worked together to gain equality for African Americans and women. The overall focus of the book is their amazing relationship, which lasted more than forty-five years…Despite a major disagreement over the Fifteenth Amendment, the short pages of text show how they helped the nation make profound progress in the area of ‘liberty and justice for all.’” —Booklist
“Offering a new perspective…the author eloquently weaves together information about the fight against slavery and the battle for women’s rights, setting this title apart from others…A solid addition that will spark conversations about gender and racial equality.” —School Library Journal
“Two important historical figures from separate worlds come together for the common purpose of freedom. From the first line of this work of creative nonfiction…this biographical gem places the spotlight on a friendship far ahead of its time.” —Kirkus Reviews
“Lizan Mitchell’s emotive delivery enhances this dynamic picture of the unique friendship and vast accomplishments of civil-rights activists Susan B. Anthony and Frederick Douglass…Mitchell impeccably re-creates each character through their conversations and rousing public speeches. They spoke their minds despite being booed, out-shouted, and even threatened. Quotes from their letters and from newspapers are movingly rendered as are their ideological disagreements. Notes by the author reveal that she decided to write this book because she believes this fascinating friendship should be more well known.” —AudioFile

Suzanne Buckingham Slade holds a mechanical engineering degree and worked on NASA’s Delta rockets and Titan rockets. Her books include Countdown: 2979 Days to the Moon, Daring Dozen: The Twelve Who Walked on the Moon, Astronaut Annie, Dangerous Jane, and The Inventor’s Secret, among others. She invites you to visit her online at suzanneslade.com.