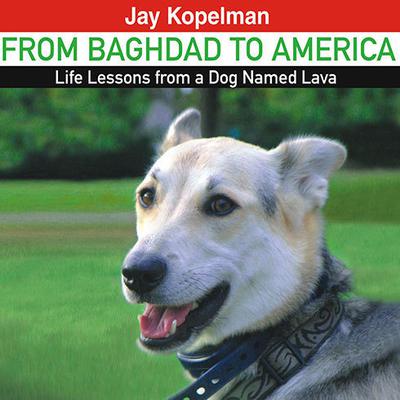 From Baghdad to America: Life Lessons from a Dog Named Lava

Lieutenant Colonel Jay Kopelman won the hearts of readers with his moving story of adopting an abandoned puppy named Lava in a hellish corner of Iraq. For this Marine and his comrades, the puppy served as an important emotional touchstone in a grim and seemingly endless war. Kopelman now writes about what it's like to be home. He credits his canine best friend with finding his wife—in the park, Lava began playing with her dog and the two owners met—and for keeping him sane as he readjusted. With the same intelligence and insight he showed in From Baghdad, With Love, Kopelman sets forth more than a dozen lessons, including: Life can change in an instant, but you'll be able to handle it; passion for something can help you tap into your most powerful reserve of energy; have a standard operating procedure for everything; and never forget who you are or how you got here. Active and retired troops, soldiers' friends and families, and everyone who has ever loved a dog will embrace this book.

[Narrator Christopher Lane] portray[s] to perfection an ex-Marine whose writing admits to anger, hostility, and personality damage resulting from his combat experiences. —AudioFile
“An inspiring story, one that will connect even with readers allergic to ‘life lessons.‘” —Booklist

Jay Kopelman is a former lieutenant colonel in the US Marine Corps. He lives in La Jolla, California, with his wife and their two children, Cheddar the cat, and, last but not least, two dogs: Koda and, yes, Lava.