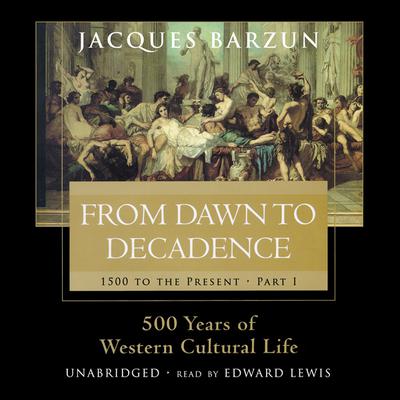 From Dawn to Decadence: 500 Years of Western Cultural Life, 1500 to the Present

An ALA Notable Book Finalist for Nonfiction

Drawing on a lifetime of studies across a broad territory, highly regarded cultural historian and critic Jacques Barzun here synthesizes the sum of his discoveries and conclusions about the whole of Western culture since 1500.

The triumphs and defeats of five hundred years form an inspiring saga which modifies the current impression of Western history as one long tale of oppression by white European males. Women and their deeds are prominent, and freedom (even in sexual matters) is not an invention of the last decades. And when Barzun rates the present not as a culmination of history, but as a decline, he is in no way a prophet of doom. Instead, he shows that decadence is the normal close to a great period, and a necessary condition of the creative novelty that will burst forth—tomorrow, or the next day.

“A stunning five-century study of civilization’s cultural retreat.” —New York Times
“Barzun, the renowned cultural critic, historian, and former Columbia provost and professor, offers much more than a summation of his life’s work in this profound, eloquent, often witty historical survey. A book of enormous riches…[and] a book to be reckoned with.” —Publishers Weekly (starred review)
“The fast-paced reader provides a stimulating experience for listeners interested in an expert’s view of history from unusual and clever angles.” —AudioFile
“Others have written about the end of western culture, but none with more cogent erudition than Barzun. With a poise born of decades of distinguished scholarship, Barzun recounts the religious, political, artistic, and social revolutions that shaped western culture…An impressive culmination to a lifetime of serious reflection.” —Booklist (starred review)
“To hear [this recording] is like attending a fast-paced seminar from a professor with a lively and fertile mind…A magnificent book, ably read by Edward Lewis.” —Library Journal
“This lively and opinionated survey of western culture marks the capstone of the noted scholar’s intellectual career…An extraordinary achievement by one of the glittering minds of our time.” —Kirkus Reviews
“The book is so readable, and its handling of even familiar matters so fresh, is its civilized, conversational, witty, jargon-eschewing tone of voice. It is a highly personal book without being an eccentric one.” —Wall Street Journal
“A great achievement. Encyclopedic without being discontinuous, the book hardly seems as long, as carefully constructed, or as densely packed as it is. Though the ideas it explains are often complicated, the explanations it offers are limpidly clear, sparkling with biographical anecdote and counter-canonical observations, entirely free of those deserts of abstraction unrelieved by example often found in works of cultural theory.” —New York Times Book Review
“An immense, ambitious panaroma of the period that historians call ‘modern’ and that the venerable author believes is ending. Barzun writes with unfailing, stylish lucidity and enlivens his tale with ingenious devices, such as entering into the preoccupations of the past through a particular time and place.” —New Yorker
“If you’re not used to sitting on the edge of your seat for 750 pages, saying ‘Well, I’ll be damned!’ every paragraph or so, you should go into training before taking on From Dawn to Decadence, Jacques Barzun’s intensely engaging history of Western culture after 1500.” —Newsweek

Jacques Barzun (1907–2012) was born in France and came to the United States in 1920. After graduating from Columbia College, he joined the faculty of the university, becoming Seth Low Professor of History and, for a decade, dean of faculties and provost. The author of some thirty books, he received the Gold Medal for Criticism from the American Academy of Arts and Letters, of which he was twice president.