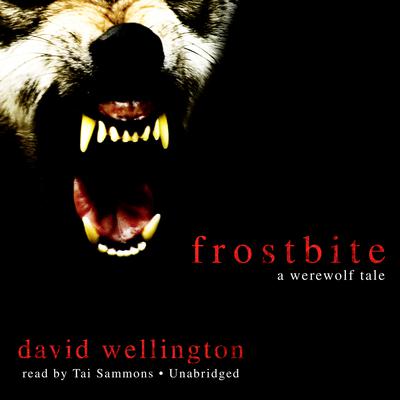 There’s one sound a woman doesn’t want to hear when she’s lost and alone in the Arctic wilderness: a howl. When a strange wolf’s teeth slash Cheyenne’s ankle to the bone, her old life ends, and she becomes the very monster that has haunted her nightmares for years. Worse, the only one who can understand what Chey has become is the man—or wolf—who’s doomed her to this fate. He also wants to chop her head off with an axe. Yet as the line between human and beast blurs, so too does the distinction between hunter and hunted, for Chey is more than just the victim she appears to be. But once she’s within killing range, she may find that—even for a werewolf—it’s not always easy to go for the jugular.

“Entertaining and thrilling…Wellington is a vivid storyteller, whether describing gruesome attacks, expressing the subtle attraction between man and woman or chronicling the life of a troubled teen.” —Associated Press
“Frostbite packs a punch. Right from the first chapter it takes you on a suspenseful trip into the Arctic wilderness…Frostbite is a refreshing rejuvenation of the werewolf legend. Wellington’s werewolves are completely merciless. They hate everything about mankind and will stop at nothing to destroy any human that comes into their path…This was the first book that I have listened to that was narrated by Tai Sammons. I was very impressed. She was perfect. As far as I’m concerned one of the key elements to having a successful audiobook series is casting the right voice. You could have a book on the bestseller list but if it’s read by someone…well, someone like me without the narration chops then even my mother wouldn’t listen to it. Tai Sammons has what it takes. I’m looking forward to her performance in the sequel, Overwinter…Frostbite is intense, suspenseful and at times very graphic. So if you are a horror fan or if you liked the Twilight series and you want to know what an untamed werewolf would be like then you should try Frostbite.” —Audiobookfans.com

David Wellington is the author of several novels. His zombie novels Monster Island, Monster Nation, and Monster Planet form a complete trilogy. He has also written a series of vampire novels including 13 Bullets, 99 Coffins, Vampire Zero, and 23 Hours, and in 2009 began his Werewolf series, starting with Frostbite and Overwinter. His novels have been featured in Rue Morgue, Fangoria, and the New York Times.