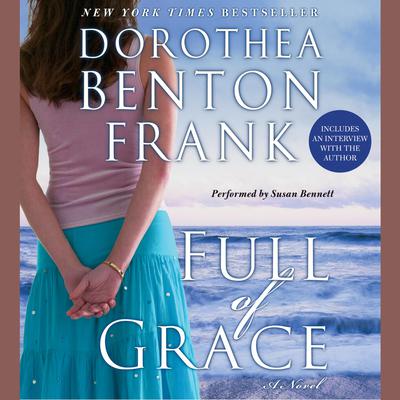 The rich atmosphere of South Carolina, both Hilton Head and Charleston, is brought vividly to life by Dorothea Benton Frank, a South Carolina native who, with her exquisitely evocative prose, makes you smell the sea air, see the palmettos, and savor the sweet tea, but this time it comes with a side of antipasti.

Hilton Head, South Carolina. Retirement heaven -- at least it's supposed to be, but for Big Al and Connie, the move from New Jersey to this southern paradise has been fraught with just a few complications. Especially for their daughter, Grace.

Well, that's what she likes to be called. Her family insists on Maria Graziella. Seriously, enough with the Neopolitan. That might have been okay in New Jersey but now it's just plain silly and Grace at thirty-one is, horror of horrors, still unmarried. No wonder her family drives her crazy. Well, that and the fact that she's living with the man she would marry if they both weren't so commitment phobic. Michael is a doctor and a scientist and Grace has a good idea that he's also an atheist. Over the years, Grace has become a bit ambivalent about her faith but her family is as old-fashioned Italian as they get. The stage is set for a major showdown that might just change Grace's outlook on life, family, and the new South.

“Before you get the notion that Full of Grace is strictly another tale of unmitigated sass, overcoming obstacles, and finding true love, know that Dorothea Benton Frank has something more on her mind…Frank has set out to explore wider terrain: ‘life’s surprising miracles of faith.’” —Charleston Post and Courier
“Full of traditional family dynamics, as well as a dose of miracles, Frank’s novel is deeply spiritual. Bennett’s adept handling of the aspects of faith and humor produces an entertaining and thought-provoking listening experience.”   —AudioFile
“A masterful storyteller…Her vibrantly eccentric Russo clan may be her endearing creation yet.” —Booklist

Dorothea Benton Frank (1951–2019) was the New York Times bestselling author of Bulls Island, The Christmas Pearl, The Land of Mango Sunsets, and many other books. She appeared on the Today show and Parker Ladd’s Book Talk. She was a frequent speaker on creative writing and the creative process for students of all ages and in private venues, such as the National Arts Club, the Junior League of New York, Friends of the Library, and the Susan G. Komen Breast Cancer Foundation.