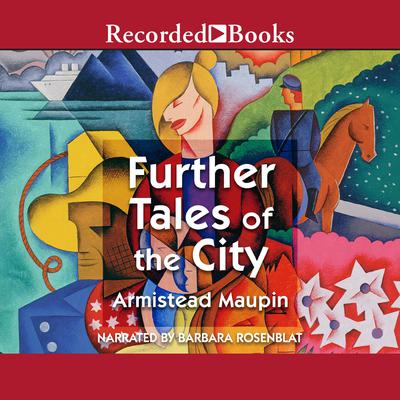 Further Tales of the City

The Tales of the City Series: Book 3

The calamity-prone residents of 28 Barbary Lane are at it again in this deliciously dark novel of romance and betrayal. While Anna Madrigal imprisons an anchorwoman in her basement, Michael Tolliver looks for love at the National Gay Rodeo, DeDe Halcyon Day and Mary Ann Singleton track a charismatic psychopath across Alaska, and society columnist Prue Giroux loses her heart to a derelict living in a San Francisco park.

Armistead Maupin is the author of numerous novels, including the Tales of the City series, Maybe the Moon, The Night Listener, and Michael Tolliver Lives. His novels Sure of You and The Days of Anna Madrigal made the New York Times bestsellers list. Three miniseries starring Olympia Dukakis and Laura Linney were made from the first three novels in the Tales series. The Night Listener became a feature film starring Robin Williams and Toni Collette. He was born in Washington, DC, in 1944 but grew up in Raleigh, North Carolina. A graduate of the University of North Carolina, he served as a naval officer in the Mediterranean and with the River Patrol Force in Vietnam. He worked briefly as a reporter for a newspaper in Charleston, South Carolina, before being assigned to the San Francisco bureau of the Associated Press in 1971.