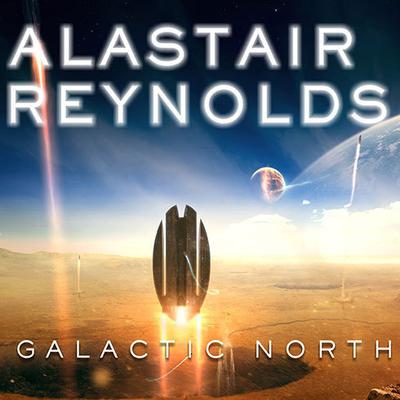 Centuries from now, the basic right to expand human intelligence beyond its natural limits has become a war-worthy cause for the Demarchists and Conjoiners. Only vast lighthugger starships bind these squabbling colonies together, manned by the panicky and paranoid Ultras. And the hyperpigs just try to keep their heads down. The rich get richer. And everyone tries not to think about the worrying number of extinct alien civilizations turning up on the outer reaches of settled space...because who's to say that humanity won't be next? Set in the Revelation Space universe, this is the first short story collection by the author who has been called "one of SF's best and most ambitious novelists." The eight stories included in Galactic North are "Great Wall of Mars," "Glacial," "A Spy in Europa," "Weather," "Dilation Sleep," "Grafenwalder's Bestiary," "Nightingale," and "Galactic North."

“Dark, gothic, and graphic, with tightly composed narratives full of shocks and jaw-dropping moments. Atmosphere and economically-drafted characters are as important as the big ideas.” —BBC Focus
“The stories are written with real energy. Dark, satirical, and frequently dystopian. This is gothic SF with gore as Reynolds ensures his taut narrative’s grip from the first sentence.” —SFX