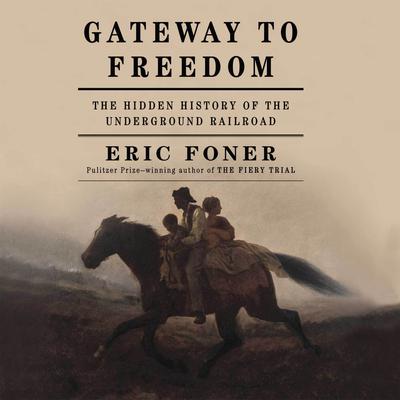 Gateway to Freedom: The Hidden History of the Underground Railroad

They are little known to history: Sydney Howard Gay, an abolitionist newspaper editor; Louis Napoleon, a furniture polisher; Charles B. Ray, a black minister. At great risk they operated the underground railroad in New York, a city whose businesses, banks, and politics were deeply enmeshed in the slave economy. In secret coordination with black dockworkers who alerted them to the arrival of fugitives and with counterparts in Norfolk, Wilmington, Philadelphia, Albany, and Syracuse, underground-railroad operatives in New York helped more than 3,000 fugitive slaves reach freedom between 1830 and 1860. Their defiance of the notorious Fugitive Slave Law inflamed the South. White and black, educated and illiterate, they were heroic figures in the ongoing struggle between slavery and freedom.

Making brilliant use of fresh evidence—including the meticulous record of slave rescues secretly kept by Gay—Eric Foner elevates the underground railroad from folklore to sweeping history.

“Illuminating…an invaluable addition to our history.” —New York Times Book Review
“Compelling…by turns scholarly and gripping.” —Newsweek
“JD Jackson offers a solid, easy-on-the-ears narration of this reexamination of the Underground Railroad. Jackson takes an almost professorial-sounding approach in his tone and cadence. But he’s by no means pedantic. He varies both the pitch of his voice and the pacing to fit the material as well as adding emotion where appropriate. For direct quotes, he pauses just before he reads the quotation, giving the listener clear audible cues about the content. He wisely doesn’t try to give speakers unique vocal characterizations as the quotations often are too short for such a technique to be effective. This book is more scholarly than action filled, and Jackson’s reading makes it easy to follow. Winner of the AudioFile Earphones Award.” —AudioFile

Eric Foner is the author of many award-winning books on the Civil War and Reconstruction, including the winner of the Pulitzer Prize for History, The Fiery Trial: Abraham Lincoln and American Slavery. He is the 2020 recipient of the Anisfield-Wolf Book Award for lifetime achievement. He is DeWitt Clinton Professor Emeritus of History at Columbia University.